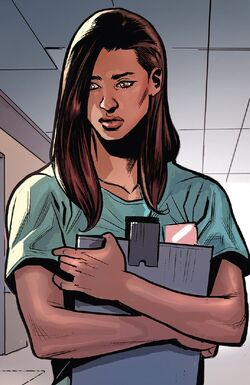 Dr. Claire Temple was born an raised in New York City. She met and married her college sweetheart Bill Foster. However over time their relationship soured and the pair separated.[1] She took a job as a Medical Doctor for Dr. Noah Burstein at his 42nd Street Storefront Clinic.[2]

Claire first encountered Luke Cage, the Hero for Hire, after he was attacked by hitmen hired by Diamondback. Claire, as a nurse, was shocked to find that Cage wasn't injured by the attack, and insisted on having her colleague look at his bruises. When the two arrive at Dr. Burstein's clinic where Claire works, Burstein, who was the man responsible for Luke getting his powers, had been attacked by the syndicate looking to convince him into paying a protection fee. Claire suggested that they take up Luke's services. Claire was later kidnapped by Diamondback and Dr. Burstein called Luke for help. Claire is freed and goes for help while Cage battled his old friend Diamondback. Claire returned with the police.[2] Cage explained what happened to the police and Claire corroborates his story.[3] After meeting to two start to become romantically involved.[4] After a case Claire walked in just as Luke was receiving kisses from a couple of clients.[5]

On Christmas Eve, Claire was visited by Luke at the Clinic. Later as Luke and Claire are out for a walk, they encounter what appears to be a war vet. Upon giving him some change, he has a bout of shell-shock and attempts to shoot them with an automatic weapon. Luke quickly disarms the man and breaks his gun, feeling sorry for the man they leave him be. This "vet" however turns out to be Marley once more, continuing the test he started earlier. After taking Claire out for dinner, the two are attacked by Marley yet again, this time dressed as a futuristic "police-man" right out of George Orwell's 1984, demanding their "identification cards" and attacking Luke with a laser. Luke manages to subdue Marley and turn him over to the police. Claire went home in a cab as Luke went after Marley. Later they walked through the snowy streets and shared a kiss.[6] Claire received regular visits from Luke as he was looking for jobs.[7] Dr. Burstein tried to hide Luke's past from Claire and Daily Bugle reporter Phil Fox.[8][9] After the death of Lionfang Luke was consumed himself with grief over the whole incident, until Claire consoled him.[10]

Phil Fox and Billy Bob Rackham decide to get revenge on Cage by kidnapping Claire. They kidnap the wrong woman. Luke went to investigate, but Claire went looking for him and only found Phil Fox dead in Mrs. Jenks apartment.[11] As Rackham escapes with Mrs. Jenks as his hostage, and Claire Temple beings accused of the murder of Phil Fox, Luke Cage decides to try and learn the truth. When the police refuse to allow him to speak with Claire, he creates a distraction on the roof of the jail allowing him to scale up the wall and talk to Claire and learn the truth of the situation. He also learns that Claire knows that he is a wanted felon. Luke promised to find the real killer and clear Claire's name.[12] Ben Donovan, a lawyer, got a confession from Jenks that Rackham was the real murderer of Phil Fox, clearing Claire's name before she died of her injuries in the ambulance. Claire reunited with Luke on her release.[13]

Claire found Luke Cage at the grave of Reva Connors he told her that everyone he gets close to ends up dying in the end. Claire told him they should stay together no matter what.[14][15] She also told Noah that she's leaving for a few days but didn't tell Noah where she was going.[16]

Claire left to find her ex-husband Bill Foster, who asked her to help him in Los Angeles.[16] Despite Claire's pleas for Cage not to follow her, Luke did pursue Claire to California and helped free her ex-husband from the Circus of Crime.[17] Luke and Claire reconciled and the two returned to New York City.[18]

Claire was out to dinner one night with Luke and Noah when they were attacked by an assailant known as Spear. Cage fought him off.[19] It was revealed that Spear was a former test subject of Noah.[20] The two stay together through thick and thin.[21] But Claire regularly argued with Luke over the sort of life they're supposed to have with his chosen profession.[22] The relationship, however, began to have its problems.[23] Luke visited Noah and Claire when their room was filled with knock-out gas as he was kidnapped.[24] Claire and Luke decide to go out on a date to repair their relationship.[25][26][27] She helped Luke out when he teamed up with Iron Fist.[28]

Soon Claire tired of Luke's constant exposure to danger and the two separated.[29].[30] [31] In an unusual twist, Claire Temple served as a doctor to Luke Cage's next romantic interest Harmony Young after she was attacked by Sabretooth.[32]

She treated Spider-Man; in full costume after he passed out while fighting the Man-Thing. However he had to leave when Daredevil was in trouble fighting Solarr[33]

Claire treated Rafael Scarfe when he was injured. Luke demanded that she give him the best treatment possible, and she took that as an insult.[34] When Luke was ready to quit, Claire convinced him to remain a Hero for Hire with Danny Rand.[35] After being injured by Master Khan Danny found that he was been brought to the hospital by Luke, and being cared for by Claire Temple.[36]

When Captain America (Sam Wilson) was transformed into a Werewolf by Dr. Karl Malus he contacted Claire for help. However, his condition was temporary. She was more concerned with Joaquin Torres who was now part Vampire.[37]

Medical Degree: Dr. Claire Temple is a brilliant medical professional. She can deal with injuries from the mundane to the traumatic. She chooses to work in a free clinic in New York.[2] She later became an expert in superhuman medicine.[37]

Claire possesses the normal human strength of a woman of her age, height, and build who engages in regular exercise.[2]

Like this? Let us know!
Retrieved from "https://marvel.fandom.com/wiki/Claire_Temple_(Earth-616)?oldid=6127425"
Community content is available under CC-BY-SA unless otherwise noted.