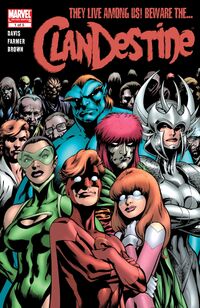 In 1168 A.D., a man named Adam was born in the village Ravenscroft. Adam had a near-fatal accident when he was sixteen, but he miraculously recovered after a dream about a strange, inhuman woman. He was renamed Adam of Destine by the town, who felt the young man was destined for greatness. Adam joined the Third Crusade. During the battles, Adam was never once injured and he believed that the "angel" he dreamed about protected him. He became overconfident and was captured by a warlord called Al Kadhdhaab. When he awoke, Kadhdhaab claimed that he needed Adam's help to defeat the wizard Sujanaa min Raghbah. Sujanaa had a large gem with mystical powers that fulfilled his wishes. In a vision Sujanaa had seen that Adam was destined to kill him and somehow Kadhdhaab had seen this as well. Adam entered Sujanaa's palace and attacked Sujanaa but was easily overcome by the wizard's power. The wizard ranted that his gem loved Adam, and would not allow Sujanaa to hurt him.

Adam managed to distract the wizard by telling him that Sujanaa had wasted his life: all his power was only being used to protect his power. The wizard realised that he had become trapped by his own desire for power and during a moment of doubt, Adam was freed and killed the wizard. Adam then felt that there was something alive within the gem and tried to destroy its prison, but Kadhdhaab stabbed him in the back. Kadhdhaab tried to take the power of the gem for himself, but Adam managed to destroy the gem with his last strength. A female genie, Elalyth appeared from the gem and destroyed Kadhdhaab. She then restored Adam, making him immortal and invulnerable and the two became lovers.[1]

Over the next few centuries Adam and the Elalyth had many children. Nearly all of them inherited superhuman abilities from their parents and were extremely long-lived. One of Adam's children, Newton, set up the Relative Stranger Protocol. The protocols would create new identities for the long-lived family members whenever they required it and would protect the family should one of them be uncovered.[citation needed]

In the late 20th century, Adam killed Vincent, one of his sons, who had been abusing his powers. The family fell apart after that, several of the family members disagreeing with Adam's decision and Adam left Earth in a vehicle created by Newton. The newly born twins, Rory and Pandora, were left with Walter Destine, who posed as their uncle and guardian, and Florence, who posed as their grandmother.[citation needed]

Imp and the Crimson Crusader

Rory and Pandora's powers activated far earlier than those of their siblings, because they were twins. The children, believing they were mutants decided to become superheroes. As the Crimson Crusader and Imp, they set out to battle crime. One evening they found two groups fighting each other over a special device: the creature Lenz and his "children" and Dr. Hywel Griffin and his Omegans. Not knowing which side to help, the children grabbed the device, known as the Gryphon, and left the scene, intending to return the device once they found out who the rightful owner was.[citation needed]

The Gryphon turned out to be a device that could change the genetic sequence of living creatures. Lenz, a former human scientist turned into a new species by Advanced Idea Mechanics (A.I.M.) hoped to use the Gryphon to stabilize his "children", who usually died within several days. Griffin was an albino who hoped to cure himself with the Gryphon. Both parties tried to track down the Destine twins. During the twins' attempt to flee, Pandora had lost her cape, which had the name of their sister, Kay Cera, in it, who had designed it. Lenz sent his children out to kill Kay and they found the history of the Clan Destine in Kay's notebook. Kay herself survived by transferring her mind to a cat. Lentz creatures attacked the various members of the Clan Destine, killing Florence and Maurice.[citation needed]

Most of the other family members united and tracked down Griffin, whom they thought responsible for the deaths of Flo and Maurice. Lenz appeared and kidnapped Rory, but they were all saved in time by Adam who had felt the death of his children and returned to Earth. Adam defeated Lenz, but let him go when he realised that Lenz was not evil, just trying to let his species survive.[citation needed]

The Clan Destine returned home and Walter wanted the children to return to school and live normal lives, even threatening to split them up after they caused trouble. The children fled to New York to become full time superheroes, but Spider-Man convinced them to return home. In return Adam and Walter, following Dominic's advice, would pose as superheroes to help and watch Rory and Pandora during their missions.[citation needed]

When Adam tried to return the Gryphon to Griffin, Lenz, now allied with MODAM, tried to steal it again. MODAM was more interested in the Clan Destine though and kidnapped Cuckoo, leaving a girl named Myror in her place. Myror had the ability to reflect to people what they wanted to see. Wanting Cuckoo to return home with them, the Clan saw Myror as Cuckoo. When she recovered, Myror told the Clan that she wanted to help them defeat MODAM who had used her as a slave for years. Back in the A.I.M. base, MODAM tried to switch minds with Cuckoo to get a beautiful, human body for herself.[citation needed]

Meanwhile Rory was manipulated by the spirit of Vincent into resurrecting him. Vincent joined Rory and Pandora into saving the Clan from MODAM and A.I.M. Vincent used his powers to torment all non-Clan members with personal demons, including William and Myrror. Vincent then tells the others that with Adam's absence, he now has to take over the leadership of the Clan Destine.[citation needed]

Gracie and Cuckoo banished a demon called Synraith from Earth many years ago with the help of Charles Xavier. The demon returned and tried to eliminate the three who stopped him. The X-Men and the ClanDestine teamed up to stop the demon and save their family members.[citation needed]

Final Fight With the Omegans

Dr. Griffin and the Omegans again attacked the Destines. In the course of the attack, what happened to Thaddeus in 1374 was revealed. Newton built a device to help Dominic ameliorate the effects of his powerful senses. Dominic also travelled through time and space, and encountered the superhero group Excalibur. Walter also struggled with his fears of becoming like Vincent. Adam reduced Griffin to an infant, and told the Omegans never to threaten his family again, before being reunited with Elalyth, the mother of his children, with whom he went to live in Yden. Dominic decided to relocate to the idyllic Etherea. Unknown to anyone, a pool of energy emerged from the grounds of the Ravenscroft, and flew into Vincent's grave, causing the gravestone to crack.[citation needed]

The Thing, Human Torch and Doctor Strange encountered an interdimensional rift whose energy hurled them on a journey through time and space, during which they came into contact with the Destine family at various points in history. Thing in particular encountered Vincent as a young boy, and then as a young man, and was present at his death. Vincent was tortured by his inability to use his powers to stop the pain and suffering in the world, and was revealed to have been possessed by demons who were trying to delay Doctor Strange in healing the dimensional rift. Fearing the destruction Vincent's powers were unleashing and for his son's soul, Adam fatally snapped Vincent's neck. The dimensional energy was driven away, and the heroes were returned home.[2]

The Destines travelled to New York tracking a robot called the Plastoid. Cuckoo believed that it was inhabited by a parasitic elemental, whom she intended to banish back to its dimension. Dominic and the rest of the Destines, however, believed the robot was in fact inhabited by Vincent's spirit, and aimed to stop Cuckoo from destroying it. During this conflict they also encountered Daredevil and Doctor Strange, who assisted the family. Daredevil destroyed the Plastoid, releasing Vincent's spirit from it.[citation needed]

In approximate order of age:

Retrieved from "https://marvel.fandom.com/wiki/ClanDestine_(Earth-616)?oldid=5812319"
Community content is available under CC-BY-SA unless otherwise noted.