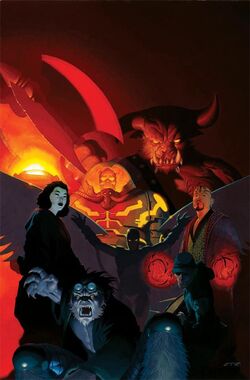 Clan Akkaba is a cult composed of Apocalypse and his blood descendants.

The name Akkaba had its origins in the time of Ancient Egypt. Before the arrival of the time traveling Pharaoh Rama-Tut, who would one day become Kang the Conqueror and then Immortus, Akkaba was a small but promising lone settlement on the very edge of the Amentet and the very edge of the Valley of the Kings. Its members were a suspicious and superstitious lot who prided themselves a culture separate and apart from the rest of Egypt. Their fear, however, proved to be their undoing. News spread throughout Egypt of the new Pharaoh who had fallen from the sky and seized control of the throne. They took this as an omen so when one of their lot gave birth to a gray child with blue lines running across his lips and face, they quickly cast the child out, unaware that their rejection would cause the child to eventually become Apocalypse.[2]

Not realizing the value of the child they had left to die, they carried on with their simple life. This mistake would be their last as Baal and the Sandstormers massacred them all in search of the child. Akkaba was bathed in blood. The only survivor was En Sabah Nur, the first one, so named by his new father Baal.[2]

When Apocalypse fully realized his power and defeated the Pharaoh and his army, Egypt entered a new age, one in which his children walked among them. Apocalypse forged his clan, now called Clan Akkaba after his birthplace and those who had left him to die. During this time, the site of Akkaba reached somewhat of a renaissance as great monuments were erected there, whether by Apocalypse, his descendants or by the new Pharaoh, no one knows.[3]

The clan at this point began forming customs, whether by Apocalypse's will or their own accord. They lived by the "survival of the fittest" creed and the members of the clan would deceive, betray and even kill their own relations merely to be deemed closest to Apocalypse. Egypt peaked and so too did the clan's influence on the world. With attacks by Alexander the Great and his Persian armies, Apocalypse and his kin fought valiantly in a battle he would never forget. This battle helped him winnow out the weak in his clan and as Egypt became nothing but a distant memory, the clan's influence moved on to Ancient Rome.[4]

For thousands of years, Clan Akkaba had the mission of safeguarding the legacies and mantras of their lord and ancestor. They weaved in and out of history when called upon to do his bidding. It was said when Rome burned, Clan Akkaba was there to light the fire.[4]

During the Third Crusade,[5][6] Bennet du Paris encountered in Akkaba the mutants Sahreed and The Scarab, before manifesting his own powers.[7] After du Paris refused to become his servant, Apocalypse locked away the knight he had renamed "Exodus" for centuries in the Swiss Alps.[5]

In 1459 in Romania, the Horseman of War led Apocalypse's Riders of the Dark against Vlad Dracula's army.[4]

Clan Akkaba allegedly had at least a member on the Mayflower's journey to the New World in 1620.[4]

When thousands were led to the guillotine during the French Revolution, Clan Akkaba was there to sharpen the blade.[4]

At this time the have reproduced and gave birth to the biggest clan they had ever seen in their long history. They gathered many riches and placed themselves in notable and influential positions to better influence and control the world. As the clan grew, it evolved, holding true to its ‘survival of the fittest’ creed, they continued to battle and kill each other to gain Apocalypse’s favor. Although it is unknown what threats they faced early on in the new world. Margaret Slade, the eldest known Akkaba member at the time, noted she had witnessed Apocalypse cut a whole tribe of N'Garai demons to pieces when she was a girl. Being the oldest member of the clan dictated that none of the other members had been born yet. Still chairman Kabar Brashir, who was roughly the age of her eldest son Hamilton, had witnessed the clan summon Apocalypse thirty-six years previously when he was just a boy. It is unknown what these threats to the clan were, but none prepared them for what lay ahead. Noted leaders include Hamilton Slade, Frederick Slade, Kabar Brashir, and Margaret Slade.[4]

During the Victorian era, the clan was set upon by Dracula and nearly exterminated. A string of mysterious murders started to take place surrounding members of the clan. When their leader Hamilton disappeared, they were left with no choice but to summon their lord. In 1897, they awoke Apocalypse in order to deal with the threat of Dracula, unknown to the members of the clan, Dracula was turning members of Clan Akkaba into Vampires in order to battle Apocalypse, as revenge for his earlier defeat and the way the Dark Lord previously shamed him. As punishment for being so weak in requesting a boon from him, Apocalypse killed one of their leaders.[4]

The ensuing battle sees the massacre and extermination of all members of Clan Akkaba except Jack Starsmore and Frederick Slade and their disbandment by decree of Apocalypse. With help from Apocalypse and Van Helsing, they managed to kill Dracula, although the master vampire would frequently return and suffer many more deaths. The continuation of the Akkaba line was secured by Ozymandias through Frederick Slade impregnating a prostitute called Miss Ferguson. Ozymandias, realizing an opportunity to get revenge on Apocalypse, secretly planned to reshape the clan in his image for use against his lord eventually.[8]

The new clan Akkaba assembled recently under Ozymandias and an elderly Fredrick Slade. This new clan revealed that Chamber was a member of their bloodline, being a descendant of Jack Starsmore. While the Starsmore family never forgot about Apocalypse, Chamber rejected their offers. It is unknown where the clan’s loyalties lie and what plans they had up their sleeve, but as they said, Clan Akkaba will always be there.[9]

Deadpool, whom Warren Worthington had been paying to search for Clan Akkaba, found a Celestial ship buried underground where the clan killed one of their own during a ritual. Deadpool ended up caught, but not before the rest of X-Force was alerted. X-Force were able to rescue Deadpool and defeat the savage creature that attacked him, but the temple itself made a temporal jump, forcing the team to retreat. Warren then commented that the creature they defeated was War, and not only was the clan trying to resurrect Apocalypse, they had also revived his final Horsemen. Later it was revealed that Apocalypse had been revived as a young boy and was being taken care of by the Clan Akkaba's members themselves.[10]

The clan was teaching the young Apocalypse that X-Men were tricking the mutants into being locked away, telling them it was for their own good. He was told that the X-Men were tyrants and Apocalypse was the savior. That the worshippers of X (Uncanny X-Force) would come to kill him because he threatened their grip on power, and it was his birthright to usher in the salvation of homo superior by bringing about the Age of Apocalypse. When X-Force came to kill Apocalypse, they were instead defeated by the final Horsemen of Apocalypse. Ozymandias told the young Apocalypse they should kill X-Force, but the boy did not want to kill anyone, so Ozymandias ordered the Horsemen to kill them. Apocalypse had been relocated into his chamber and he asked the ship "Will there always be bad people trying to kill him", to which the ship replied, "Yes". Psylocke managed to reach Apocalypse's chamber, but after seeing that Apocalypse was a child and had no idea of his former life, she fought Archangel, who wanted to kill the boy as he saw no rehabilitation could cleanse the nature of Apocalypse, and almost killed the boy, but found that he also could not do it. The group agreed to take the boy and train him, only for Fantomex to kill the boy by shooting him between his eyes.

Clan Akkaba came together for the brief but eventful ascension and reign of Archangel their founder Apocalypses successor.[11] They would later welcome his heirs, who with their return after their kidnapping by Kang would incinerate.[12]

The Apocalypse Twins reappeared in their era when Genocide, the son of En Sabah Nur, and his Famine contacted a Celestial Gardener in order to receive the Death Seed from it and replace Apocalypse as Archangel had before him. As the Gardener judged him worthy, Uriel and Eimin appeared. Using the axe Jarnbjorn, Uriel killed the Celestial, and together, he and his sister defeated Genocide's forces. Using the Celestial Ship, they then destroyed the Peak.[13] They next traveled with Thor and Sunfire to Akkaba City to murder the remainder of Clan Akkaba and destroy the city.[14]

Some members of Clan Akkaba joined Genocide in his plan to use Archangel's clones to ensure survival of the fittest around the globe, but their plan was thwarted by Magneto and his X-Men.[15]

Another section of Clan Akkaba found Colossus, now the Horseman of War, after he was sent to them by the Apocalypse from A.D. 3167.[16]

Clan Akkaba like everything else associated with Apocalypse incorporates his creed ‘Survival of the fittest’ into their core. Being deemed the fittest is a title of great honor among clan members. It signifies that the individual is closest to Apocalypse in terms of power, it also means that the individual leads Clan Akkaba in Apocalypse’s absence/hibernation. To achieve the title one would have to undergo many tests and trials and ultimately battle any who questioned them and their rank.

The inner Council of Clan Akkaba were the leaders of the clan and those showing great skill or possessing enough of Apocalypse’s blood to be next in line or challenge the fittest for his/her title.

This ritual is only performed during times of great peril. Normally the clan dealt with whatever threats presented itself to them but sometimes the clan itself was in peril or they faced extinction, in times like this Apocalypse was summoned. The consequence for asking for Apocalypse’s help however was that one of the Inner council would be killed since asking for Apocalypse’s help meant they were weak, the fittest should never have to ask for help.

Clan Akkaba, like many of Apocalypse's subordinates, is surrounded by secrecy. In case of death, the clan removes their mark from the dead ensuring none will know of them. They don't speak about or refer to the clan outside of the safety of the clan house and never invite outsiders into their midst. Breaking these rules means death.

Clan members are branded whether at birth or while very young. The amount of Apocalypse's blood found in the child's system or strength of the bloodline determines the size of the tattoo that one receives. This is seen in Hamilton and Chamber who have strong doses of Apocalypse's blood while the murdered members in the eighteenth century had a tiny tattoo right behind their ear.

Members possess a degree of Apocalypse's molecular rearrangement ability. Other members have shown to develop abilities such as to breathe fire (Jack Starsmore), teleportation (Blink and Frederick Slade), and even psionic blasts (Chamber).

Retrieved from "https://marvel.fandom.com/wiki/Clan_Akkaba_(Earth-616)?oldid=5763996"
Community content is available under CC-BY-SA unless otherwise noted.