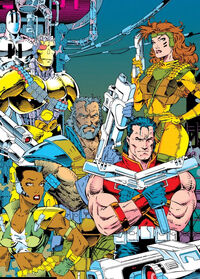 Base of Operations
Underground
Affiliations

In the late 37th-early 39th century, Clan Chosen was an Askani-inspired team of freedom fighters, formed originally by Nathan Dayspring, Tetherblood, and Aliya, following the destruction of the Askani Sisterhood by the New Canaanites led by Tribune Haight and the rise of Stryfe.[1]

Nathan was determined to carry-on the Askani legacy as the guerrilla army the Clan Chosen, a group that eventually included A.D.A.M. Unit Eleven, Aliya's sister Hope, father and son Adam and Jon Spectre, Dawnsilk, Lark, Sepulcher, and Silo. Nathan became the foremost military leader of the New Canaanites opposition and continued the ways of the Askani.[2][3]

Training in the Askani ways under surviving Askani elders, the Clan Chosen repeatedly battled the New Canaanites and the Scions of the High Lord, led by Stryfe. The Clan Chosen also clashed with the Neo-Canaanites, a group that also wished to claim Apocalypse's power. Around Nathan's sixteenth birthday, one of the Canaanite forces had been infecting members of the Clan Chosen with nanite explosives, turning them into unwilling suicide bombers. Nathan and a squad attacked the Siberian Facility, where the nanites were controlled, and learned that one of his clan was infected. Nathan attempted to destroy their ability to trigger the bombs, by destroying the facility, but the clan member was still active. Fearing for his life, the clan member ran to his teammates, but Nathan, attempting to save the remaining lives of the squad, was forced to detonate the nanite.[4]

When Stryfe's spy, Korless, infiltrated the Clan and Stryfe psychically attacked Nathan, Stryfe captured Tetherblood and the Professor from Nathan's camp and Stryfe tortured Tetherblood to find out its importance. The withdraw of the Professor from Nathan caused him to become very sick and Blaquesmith sent Aliya to the past to find Cable, the adult Nathan. Aliya was successful, though she and Nathan were unaware of Cable's true origin. Cable returned with the Professor's A.I., which again merged with Nathan.[5]

Nathan fell in love with Aliya and the two married. Aliya took the clan name of 'Jenskot' as a tribute to Jean and Scott, the parents of the Askani'son. Later, Jenskot was captured, during a New Canaanite raid and, while she did not speak of her time as a prisoner, it was hinted that she was tortured and raped by Stryfe. Eventually, Nate was able to rescue her. Jenskot later gave birth to her son, Tyler Dayspring, and Nathan never questioned his parentage. Tyler later came to join his father’s band of freedom fighters and, during a later attack by Stryfe's forces, a bomb was set and Aliya was fatally wounded. Aliya died in Nathan's arms and asked him to take care of her son, unaware that Tyler had been abducted. Stryfe ordered Parridan Haight's mind-warper, Frisco, to brainwash Tyler to reject Nathan’s beliefs and become Stryfe’s pawn.[6]

When the Clan Chosen attacked Stryfe, Tyler captured Dawnsilk, forging a neural link between them to gain Clan Chosen secrets. Nathan decided to sever the link, by shooting his son, in order to save Dawnsilk. This knocked Tyler out and further damaged his and Dawnsilk's mind as well. During another battle, Nathan and Tetherbood lead a squad to obtain Captain America's Shield, which Nathan used to inspire liberty and justice in his followers. After the Neo-Canaanites defeated the New Canannites, Nathan learned that Stryfe used the Tinex and, with the A.D.A.M. Unit Zero, fled, traveling back in time to the late 20th century. As part of his mission as the Askani'son, Nathan returned to the 20th century to foil the plans of Stryfe and preserve Apocalypse's rise to power. Nathan, now calling himself Cable, shuttled between the past and future multiple times.[2][7][2]

After Cable and Kane were injured in battle with Stryfe, Cable took Kane to Applecrust, in the future, where they were able to enhance his cybernetic prosthetics. Kane stayed with the Clan Chosen, while waiting for Cable to return. Cable returned to Kane in Applecrust and aided the Clan Chosen in battling a group of Flatliners. The Clan Chosen decided to send Kane home and destroy the Tinex, the time-travel nexus, within Niagara Falls. After battling their way to the core, Cable requested to speak to the Professor on Graymalkin and the computer announced that Graymalkin did not exist where it once was. After finding Graymalkin, Cable decided to follow Kane into the core and stop whoever used the Tinex last.[2]

Retrieved from "https://marvel.fandom.com/wiki/Clan_Chosen_(Earth-4935)?oldid=5545762"
Community content is available under CC-BY-SA unless otherwise noted.