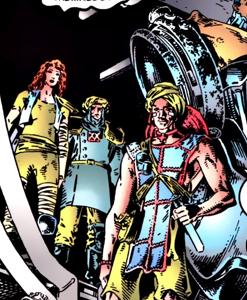 In the late 37th-early 39th century, the Clan Askani was very close to being wiped-out, by the tyrant Apocalypse. Remaining members banded together to become the Clan Rebellion, to undermine Apocalypse's power. After the many nocturnal raids of the Clan, eight year old Nathan Dayspring over-heard Slym and Redd speak about a raid on Apocalypse's citadel in Crestcoast with the Clan and followed them. After arriving, the Clan realized that they had been set-up and Ch'vayre, Stryfe, and many soldiers attacked them. While there, Slym and Redd recognized a virus Apocalypse was designing as very similar to the Legacy Virus that an adult Stryfe would release into the world. After an odd confrontation, Mother Askani telepathically spoke to Nathan, as "Rachel", and helped him unleash his power, to defeated Stryfe and told him how to destroy the virus.

After five years of raids, Redd and Prior Turrin went on what should have been the final raid of Apocalypse's Citadel and Turrin was attacked by Ch'vayre, who said that he would aid Redd in stopping Apocalypse. Redd and Ch'vayre attacked Apocalypse, stopping him from placing his essence into a teenage Stryfe, until Apocalypse beat them and realized that Stryfe was a clone. After Slym and Nathan arrived to aid Redd, Apocalypse used his power to see through their physical bodies and recognized them as Jean Grey, Cyclops, and Cable, stating that if he had met them before, he could have deduced this earlier. After Redd, Slym, and Nathan attacked Apocalypse, the disillusioned Ch'vayre betrayed his master, distracting him, and Slym ordered Nathan to disrupt any telepathic links between Apocalypse and Stryfe, seemingly killing Apocalypse. At that moment, Mother Askani began to die and Slym and Redd's souls returned to their own time. With a lack of leadership, the Clan was forgotten.

Like this? Let us know!
Retrieved from "https://marvel.fandom.com/wiki/Clan_Rebellion_(Earth-4935)?oldid=6496072"
Community content is available under CC-BY-SA unless otherwise noted.