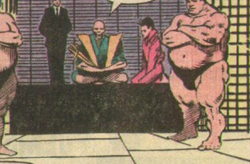 The ancestral stronghold of Clan Yashida stood in the hills overlooking the port city of Agarashima.[5] It an ancient clan, one that was nearly 2,000 years old.[6]

Since the 1600s, Clan Yashida warred with the ninja death cult of the Hand and for centuries the Hand were attempting to unite the two.[7]

Clan Yashida was a honorable and good clan, before Lord Shingen corrupted the clan and turned it into a criminal enterprise in the late 20th century.[7]

Yashida members, including Lord Shingen, were also found in Tokyo's upper-class Meguro District.[8] The Yashida Clan reached their height of power under Lord Shingen, who with the assistance of the Hand established the clan's supremacy over rival Yakuza clans and therefore dominate Japan's underworld, including its drug trade. Under his leadership, Clan Yashida were bringing in x10 as much money as the Kingpin's organization, with x10 the blood spilled.[9][10] Wolverine tore down his empire, before killing him.[9]

His daughter Mariko Yashida took over, and vowed to end the clan's involvement with the underworld and go legitimate.[11][12] She became a major power in Japan's underworld, though she was opposed by the Hand and her half-brother, the Silver Samurai who undermined her authority. She was poisoned by the Hand, and to end her suffering, Wolverine killed her.[13]

The Silver Samurai turned out to be an ineffective leader, resulting in the clan ending up under the control of the Mongolian Clan Kaishek. Due to the manipulations of Kia Kaishek, Wolverine was drawn into a Kaishek power struggle. Upon the end of the conflict, Clan Yashida regained its independence.[14]

Shingen Harada II later represented the Yashida Corporation when meeting with other business leaders at the Universal Bank when it came to Dario Agger and Roxxon's plans for the Ten Realms.[4]

Retrieved from "https://marvel.fandom.com/wiki/Clan_Yashida_(Earth-616)?oldid=5724016"
Community content is available under CC-BY-SA unless otherwise noted.