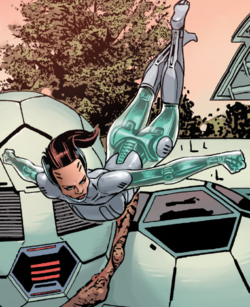 Iron Cross was a survivor of her domain that was reconstructed into the paradise called Salvation by three of Ultron's former pawns: the Human Torch, Vision, and Wonder Man. During her stay within this protected city, Clare fell in love with Wonder Man who reciprocated the same feelings towards her.

Clare spent every waking day with Simon until the threat from Ultron's forces and the Zombies became more dangerous as both groups joined forces to take down Salvation. They recruited a version of Hank Pym from his exile in the Deadlands so he could help establish a plan to kill Ultron.

After months of research, Pym figured a way to keep Salvation safe however, to accomplish their goal, the three founders of city would have to sacrifice themselves.[2] Pym's plan was to use the refuge's force-field to absorb the Ultron Engine's hive consciousness, but he needed a greater mind to control them, the mind of the three founders combined.

Clare was confronted by Simon who came to say goodbye to her, but Clare grabbed ahold of him and begged him not to go through with it. Simon reminded Clare of the oath he took to protect this paradise and it's people above anything else. With nothing to say, Clare and Simon embraced each other with a kiss.

After the invasion began Pym was visited by Clare who wished to join her lover in the protection of Salvation so he modified Iron Cross' cyborg tech so that she could replace the Human Torch in the plan and stay by Wonder Man's side. As the three flew to the origin of the shield, Clare blasted Torch out of the air and joined Vision, and Wonder Man at the emergence point, becoming the boss consciousness for Salvation's shield that was now composed of the ever-vigilant Ultron Engine army, with the exception of Lord Ultron and the zombie leader Magneto, and life began anew for those still living.[1]

Seemingly those of the Clare Gruler of Earth-616.

Seemingly those of the Clare Gruler of Earth-616.

Like this? Let us know!
Retrieved from "https://marvel.fandom.com/wiki/Clare_Gruler_(Earth-93787)?oldid=5668336"
Community content is available under CC-BY-SA unless otherwise noted.