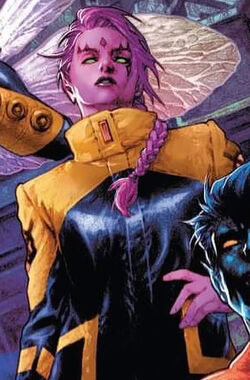 Blink was one of the many young mutants captured by the Phalanx to assimilate their powers. Blink was tense, panicky, and frightened of her powers (having "woken up in a pool of blood" after her first use of them). Clarice could not properly control her powers, and apparently was unable to teleport anything in an intact form. Instead, any object or person caught in Blink's teleportation field, also known as a "blink wave", would be shredded.[1]

She eventually used her abilities to "cut-up" Harvest, a Phalanx entity guarding her and her peers, but apparently was caught in her own teleportation field and died in the process. Because of her sacrifice, the remaining captives were set free and became the X-Men junior team Generation X.[2]

Years later, Blink was seen in the company of Selene, who helped locate and free Blink at the same place she had disappeared. Instead of accidentally killing herself she had transported herself to a different location and her mutant power allowed her to arrive intact. Harvest, however, did not survive.[3]

Blink joined the Inner Circle and with them, she fought against the X-Men, because she thought that they betrayed her, thanks to Selene's mental manipulations.[4]

After Selene was killed, Blink escaped from Necrosha. She traveled to Eastern Europe where Selene was born and tried to resurrect her, but she failed. The X-Men found her there and Dr. Strange used his magic to free Blink from Selene's spell. Freed from the spell Clarice realized that she was a killer and remembered all her victims. Emma invited her to join the X-Men, but Blink refused and escaped.[5]

Blink saved people from many disasters which caused Cyclops to send the New Mutants to find her and bring her home. The team discovered that Blink was after a band who were being controlled by an extraterrestrial sentient ship that had been using them to generate chaos energy so it could call for help. The team stopped the band and threw the ship into space.

Dani Moonstar offered Blink a choice to come and join Cyclops' X-Men in Utopia or Wolverine's team at the Jean Grey School for Higher Learning. Blink initially chose Wolverine's side and went to Westchester,[6] but occasionally returned to Utopia as a "reservist" for the New Mutants.[7]

Blink joined the mutant nation of Krakoa and apparently took part in combat at the Quarry with her name shown in the battle records as having battled to a draw with Nightcrawler.[8]

Blink would later show up as one of the members of S.W.O.R.D.'s sub-teams the Teleport Team, a group of mutants with teleportation powers, to aide S.W.O.R.D.'s commander Abigail Brand and their other sub-team The Six.[9]

Teleportation Warp Portals: Blink possesses the ability to generate light-pink teleportation warp portals. Allowing her to displace people and objects within their own set area space. Her effective range is to the Moon and back.

Blink possesses the normal human strength of a woman of her age, height, and build who engages in moderate regular exercise.

Like this? Let us know!
Retrieved from "https://marvel.fandom.com/wiki/Clarice_Ferguson_(Earth-616)?oldid=6500660"
Community content is available under CC-BY-SA unless otherwise noted.