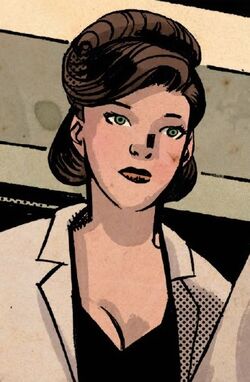 Claudia Russell was a Romanian doctor who worked in the Ravencroft Institute in New York in the United States in the early 1900s. She suffered from lycanthropy, causing her to transform into a werewolf during a full moon. During her transformation, she became entirely animalistic. She killed three people, earning her the moniker the Knickerbocker Knifer.

She was the opposite as a human, showing concern for her patients at Ravencroft. However, she also looked the other way when fellow doctor Natheniel Essex performed questionable practices on his patients. She eventually had enough of Essex's brutality and attempted to free a lobotomized patient named Logan who was placed there out of the belief that he was the Knickerbocker Knifer. Essex's helper Victor Creed tried to stop her, but he was attacked and badly injured when Logan recovered from his lobotomization.

To give Logan time to escape, Claudia transformed into a werewolf and attacked Creed. She almost killed him, but Essex appeared and injected her with something that knocked her out instantly while also causing her to maintain her werewolf form. Essex covered up Claudia's disappearance by leaving a note in her handwriting behind for Ravencroft's head Jonas Ravencroft, stating that she moved back to Romania. Essex then dissected her with Creed's help.[1]

Seemingly those of a typical werewolf.

Seemingly those of a typical werewolves. She also loses control during a full moon and becomes animalistic after transforming.

Like this? Let us know!
Retrieved from "https://marvel.fandom.com/wiki/Claudia_Russell_(Earth-616)?oldid=5792985"
Community content is available under CC-BY-SA unless otherwise noted.