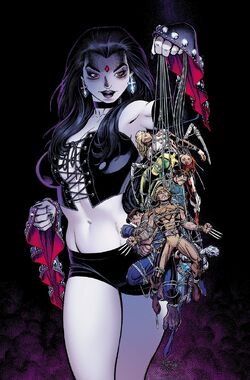 No stranger to experimenting on human lives, particularly those of mutants, the nefarious Mr. Sinister prepared a fail safe in case of his destruction - he created a virus containing his own DNA (and thus his own immensely powerful telepathic powers) to be injected into a host. His chosen host was Claudine Renko, a previously unknown woman and one of his test subjects. When Essex apparently perished during Messiah Complex, the virus was automatically activated within Claudine. Rather than dying, mutating, or becoming possessed, Claudine's body instead became a perfect genetic clone of Essex, albeit as a female. With this transformation Claudine also inherited her "father's" telepathy and, in due course, his wicked attitude towards innocent life.

Taking the name "Miss Sinister," she became a new villain working to foil the X-Men, surfacing alongside Sebastian Shaw.[2] In a plot to manipulate Daken into killing Wolverine, Claudine used her powers to invade and manipulate Daken's mind. The plan nearly worked were it not for Wolverine's intervention. Outraged at having been used yet again, Daken stabbed her in the chest, seemingly killing her.[3]

However Claudine survived and appeared again, this time targeting Wolverine's other child X-23, who had left Utopia on a journey of self-discovery. X-23, flanked by Gambit, encountered a young girl named Alice and witnessed her being murdered, although the next day Alice appeared to them, somehow alive.

Encouraging them to follow her to a peculiar desert laboratory, Alice introduced them to her employer/owner/adoptive mother: Claudine. Revealing herself openly to X-23, Claudine explained that Alice was also a clone, fourth in a series of five created by Essex as another experiment alongside several other children living in the complex. She then expanded upon her own origins, stating that the process of becoming what she is left her with vague, but invasive memories of Essex's life, and that as a malignant presence within her mind, he was slowly killing her as a means of self-resurrection. He even managed to manifest briefly before being re-absorbed back into her.

Claudine then incapacitated Gambit and strapped X-23 to a peculiar chair, stating her aim to switch their bodies - thus inheriting Laura's healing factor, something she had wanted after her stabbing, and thereby freeing herself of Essex. The plan backfired when Essex took control of Laura's body and used her to mortally wound Claudine again. Laura managed to overcome Essex's presence in her mind, expelling it through force of will. Laura, Alice, and Gambit managed to escape the laboratory as it collapsed, and arranged for the children to be given new homes before setting off on their journey again. Left behind in the wreckage, Claudine was still alive, although just barely, and was being watched over by the fifth Alice Clone - the newest host of Essex.[4]

When the Earth temporarily clashed with the alternate reality known as Earth-1610 as a consequence of a multiversal phenomenon known as an incursion, a group of amnesiac mutants from the other reality became stranded from their native universe. Among these mutants was Jimmy Hudson, whose blood contained traces of the Mothervine virus, a catalyst for artificial mutations which allowed its subjects to have their will controlled. The mutants were found and captured by Miss Sinister, who began her own experiments with Mothervine. Miss Sinister's subjects became known as the New Marauders, and they clashed with the time-displaced X-Men over Jimmy Hudson, who had managed to escape Miss Sinister's grasp.[5]

After careful study and manipulation of the gene-tampering, Miss Sinister found that Mothervine could also affect natural mutants instead of just unborn fetuses like it was originally intended. Through further experimentation it could also trigger Secondary Mutations (in some cases with mutants already having secondary mutations) and Tertiary Mutations within other mutants, greatly amplifying their original power set.[6] In some cases, however, the subjects did not take well to the therapeutic enhancement, and the effects ending up killing or degenerating their host.[7] Having managed to work out all of its defects, she along with Bastion began priming its use on a global scale under the direction of Havok and Emma Frost.[8]

The Mothervine plan was put into effect, and bombs containing the catalyst were launched into a dozen major American cities resulting in the emergence of primary mutations in people that didn't possess the X-Gene, as well as the appearance of secondary and tertiary enhancements in mutants.[9] By the time the release of Mothervine reached global levels, Emma Frost learned that all mutants created by Mothervine could be subjugated. The young X-Men launched a frontal assault on the masterminds' base, but were captured.[10] Emma Frost eventually turned against Miss Sinister, and took psychic control of the New Marauders to fight Miss Sinister. However, she activated a kill-switch she had implanted in their genetic code, killing all three instantly. The New Marauder's sacrifice was not in vain, as Emma Frost used Mach-II's magnetic powers to free Jimmy Hudson from his metal restraints, and he seemingly slew her. In the meantime, the effects of Mothervine had been contained and reversed by Magneto and Elixir.[11]

Cellular Shapeshifting: She has the ability to control every molecule of her body, allowing her to assume the form of any one she wishes. She has the potential to reduce herself into a semi-liquid state.

Superhuman Stamina: Miss Sinister's muscles produce considerably less fatigue toxins than the muscles of ordinary humans. She can exert herself at peak capacity several hours before fatigue begins to affect her.

Superhuman Strength: She possesses superhuman strength, which may be a product of her shapeshifting abilities. Sinister is able to press lift within 2 to 10 ton range.

Superhuman Reflexes: Miss Sinister's reflexes are enhanced to levels that are beyond the human body's natural limits.

Telepathy: She can read minds and project her own thoughts into the minds of others within a radius of 900 miles (on Earth). [citation needed] With extreme effort she can greatly extend that radius.

Telekinesis: She possesses telekinetic abilities enabling her to psionically levitate and manipulate living beings, inanimate objects, and to some extent energy, she can “lift” as much as 10 tons of weight and possibly more and enable her “fly” at great speeds.

Immortality (possibly formerly): She is immortal but not immune to the non-lethal effects of aging, including increasingly wrinkled skin and immobility, also have immunity to diseases and infections. It is unclear if she still possesses this ability.

While Essex was inhabiting Claudine's mind, his consciousness was slowly overwriting her own, and would eventually have done so permanently. The process was accelerated by wounds she received during her encounter with Daken, and Essex was briefly able to manifest himself entirely when she was attacked by Laura.

Like this? Let us know!
Retrieved from "https://marvel.fandom.com/wiki/Claudine_Renko_(Earth-616)?oldid=6156784"
Community content is available under CC-BY-SA unless otherwise noted.