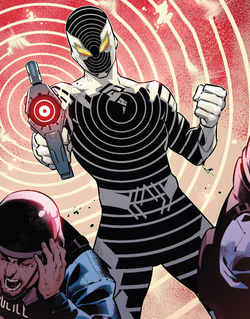 I've been thinking over what you said. About people using me... exploiting me. How no one's really gonna look out for me but me. And I think it's time I started doing that.

Clayton was a smart kid who was home-schooled by his mother. He went and saw Crusher Hogan's wrestling match and saw the first appearance of the Masked Marvel. Recording and uploading their match, he believed he made him famous because the video had over three million hits. Learning he was giving a show at the RKP Palace, he went and saw the Masked Marvel's evolution into Spider-Man. This was the first time anyone had seen the Spider-Suit, his webbing, and his ability to web-sling. While getting Spidey's autograph he heard his voice and learned Spider-Man was around his age, a fact he didn't deny. Clayton then planned to create tech, practice moves, and don a mask like Spidey.

Clayton went to every single show Spidey had, unbeknownst to him he was only there to get the money to help out his Aunt May, and even witnessed him put into a dangerous situation and nearly destroyed the whole building, thinking it was part of the show. He then completed his suit, naming himself Clash, and believed that the whole world would take notice of him.[1]

Clash came into conflict with and was defeated by Spider-Man, and sent to juvie.[2]

Thirteen years later, Clayton was released on parole, and began secretly working for super villains as a henchmen including The Owl.[3] When his latest employer, Dr. Minerva, fought Spider-Man, Clayton double-crossed his fellow henchmen when he realized Ms. Marvel was carrying an Inhuman baby she had rescued from them. Spider-Man recognized him and, after hearing he'd been trying to go straight, offered him a job at Parker Industries, which Clayton was overjoyed to accept.[4]

His position at Parker Industries was limited as he was still on probation for partaking in henchmen activities. Cole's participation with Spider-Man's globe trotting adventures, as well as cooperation with S.H.I.E.L.D. helped to resolve numerous threats, such as the Ghost and Zodiac.[5]

Ulysses, an Inhuman with precognitive abilities, shared with Spider-Man a vision shortly after meeting Clayton: that of Clayton as Clash attacking Spider-Man.[6]

Following Peter and Spider-Man's distance from him after this, Cole used a device in Peter's office to hear the echoes of the conversations held in rooms hours later; he was shocked to hear about the vision and storms out quitting his job. Meeting old friends at a pub called Moynihan's Social Club, Cole was approached by Mendel Stromm for a heist on Parker Industries.[3] After ordering an updated version of his Clash suit from the Tinkerer, Clayton met Stromm at his hideout and went vigilante on the mechanical horde on his own until Spider-Man arrived to help. While saving Parker Industries from a perpetrator and its resources, Cole was chastised by Spider-Man for his actions as they led to millions in property damage, and while he would be allowed to keep working for Parker Industries, he could only do so without working on sonic technologies. Believing his life would always be ruined and that he would never be given chances, Ulysses' vision comes to pass.[5] After a fight with Spider-Man, Clash got away. At Moynihan's Social Club, Clash makes plans to become a crime boss.[7]

Clash was next seen at the M.I.T. campus holding the international delegation hostage in order to get the attention from the criminal organization the Ten Rings. He wanted to prove that he was a viable terrorist and demanded secrets from the group and also threatened them with death. Ironheart showed up to the scene and incinerated his sonic gun. Getting riled up that a junior varsity hero was there to stop him when he was used to fighting guys like Spider-Man, Clash battled against Ironheart until the villain was defeated and arrested by the police. Before being taken away in handcuffs, Clash handed Ironheart a little trinket and said that the both of them are alike but for her, Clash hoped that someone with her talents does not let people just throw her away like they did him.[9]

Like this? Let us know!
Retrieved from "https://marvel.fandom.com/wiki/Clayton_Cole_(Earth-616)?oldid=6079665"
Community content is available under CC-BY-SA unless otherwise noted.