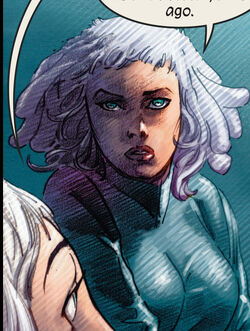 A Queen in a distant dimension, she was at some point aided by Dr. Stephen Strange and swore to be his wife. They were married and she often aided him in his magical rituals. When Queen Elizabeth I had Stephen attend to Virginia Dare, Clea helped him with that as well. She told Virginia about the crew of the Fantastik who had gained strange powers and become heroes.[citation needed]

When Stephen was taken prisoner under King James' rule, he made Clea swear that she would not interfere. Though she would have preferred to simply kill James and his men, she held by her oath while her husband was executed. She retrieved Stephen's head from the pike it had been placed upon and communicated with the dead man and he told her to take him to America. Secreting Virginia and Rojhaz aboard their ship, they all traveled to Roanoke. On the trip Clea preserved the head in a barrel of brandy (along the way a sailor drank from some of this brandy and went insane) and learned that Rojhaz is Captain America of Earth-460 and was responsible for the world's occurrences.

At the colony, Clea used the head to channel her husband that he might communicate with the others. She stayed with Nicholas Fury's group as they worked to solve the problem of the time hole, after which she returned to her home dimension.[citation needed]

Like this? Let us know!
Retrieved from "https://marvel.fandom.com/wiki/Clea_(Earth-311)?oldid=5268477"
Community content is available under CC-BY-SA unless otherwise noted.