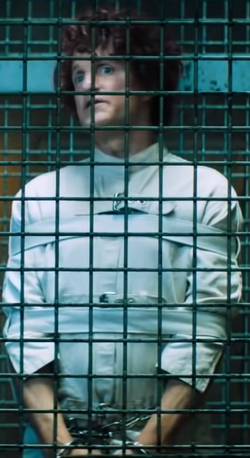 When I get out of here, and I will, there's gonna be carnage.

Cletus Kasady was born in Brooklyn. In his childhood, he was known to torture his mother's dog, and when he was orphaned he stayed at St. Estes Home for Boys, but he was later accused of burning down the orphanage which killed the disciplinarian administration. He also once pushed a girl in front of a bus, killing her instantly, for simply not agreeing to go out with him.[1]

He became a notorious serial killer who was arrested by the FBI and imprisoned in San Quentin State Prison. Prior to his incarceration, Kasady killed his grandmother by pushing her down a flight of stairs and embarked on a massacre in New York City and murdered 11 people on Ryker's Island. Following the massacre, Kasady dug up his mother's grave.[1]

Requesting an interview with investigative journalist Eddie Brock, Cletus told him that when he escaped he would resume his killing spree.[2]

According to Eddie Brock's notes, Cletus Kasady is an insane, anti-social, homicidal maniac with a lust for destruction; and finds random bloodshed to be the path to freedom. Brock also speculated that Kasady has an Oedipus complex based on him unearthing his mother's grave.[1]

Like this? Let us know!
Retrieved from "https://marvel.fandom.com/wiki/Cletus_Kasady_(Earth-TRN688)?oldid=6083519"
Community content is available under CC-BY-SA unless otherwise noted.