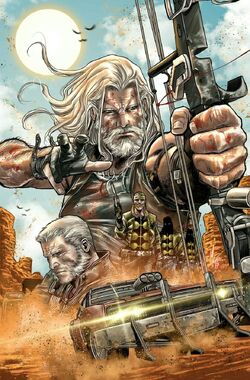 Get ready for the ride of your life.

Hawkeye was once a premier superhero and a member of the Avengers. When the super-villains banded together and took over the world, Hawkeye lead a team of Avengers to Las Vegas alongside the Thunderbolts to confront several villains, but they were betrayed by the Thunderbolts. All were killed and Baron Zemo killed Back Widow before sparing Hawkeye to torment him.[2]

Decades later, Hawkeye was hired by Jebediah Hammer help guard a delivery across South Dakota, in order to get the delivery on time Hammer told him to go through a canyon. They were attacked by the Madrox Gang, where Hawkeye managed to kill several of them but he missed the last shot. He went to see Claire Temple who told his his glaucoma was advancing and was likely to go blind in a few months and if he had anything he wanted to see himself do he should do it now. He set out to seek vengeance against the Thunderbolts and went to see Logan who told him he wouldn't help because of his family. After visiting his own family he left to go gather information about the Thunderbolts location.[3] He tracked down the Orb and gathered the location of Atlas[4] and proceeded to set about killing each of the Thunderbolts starting with Atlas[5], followed by Beetle.[6]

He rested at Josie's Bar when he was attacked by the symbiote possessed Madrox Gang and he had to flee alongside Dwight Barrett who used his Ant-Man helmet to propel their escape to the Bishop Refuge, a hidden region of the Wastelands where Hawkeye thought they would be safe. Unbeknownst to them, however, was that a piece of the Venom Symbiote had stuck to the car they used to escape, allowing the creature to track them down.[7] Hawkeye tricked the army into shrinking and chased him through a nearby canyon which had become overrun by Tyrannosaurus rexes imported from the Savage Land where one of them was eaten by a T-Rex.[8]

After Hawkeye recounted what happened to the Avengers, Kate agreed to join him and the pair set out to find Songbird.[2] The pair ended up in Mordo to see Lineage to obtain some gas. Lineage tried to betray them but they managed to take out his goons and continued there journey, finding Songbird at the Sanctuary of the Silent Sisterhood[9]

Hawkeye tracked her but before he could kill her Bullseye tracked them down and Songbird and Hawkeye fought with Bullseye with Songbird sacrificing her life, allowing Hawkeye to escape.[10] Hawkeye tracked down Moonstone and after short discussion, Moonstone attempted to kill them, but they managed to overload her Moonstone causing it to explode and kill her and her followers[11]

They tracked down Baron Zemo to a Weapon X Facility and he had to face a Super-Soldier Serum enhanced soldier before he and Kate split up with Hawkeye wanting vengeance while Kate wanting to save the scientists. He found Baron Zemo, who after decades had become wheelchair bound and frail, he killed him but realized he had been foolish to seek revenge and went to find Kate. He found her but was confronted by Avalanche who used his powers to speed up his glaucoma, blinding him.[1]

Kate and Hawkeye set out to escape, Kate giving Hawkeye directions on where to shoot his arrows. In thanks, the scientists gave Hawkeye 99 vials of the Super-Soldier Serum. Just after escaping the destroyed building, they were both confronted by Bullseye who captured Kate and threatened to kill her. This allowed her to line up Hakweye's aim with the sound of a beacon and finally killed Bullseye. To help with his blindness he traveled to the mountains of Asia to meet "Stick" to receive training which was revealed to be Matt Murdock.[12]

Hawkeye recruited Logan to help him deliver a package to New Babylon, and acted as Logan's guide across the country, ruled by infamous villains.[13]

When he attempted to barter one of the Super-Soldier Serum vials he was delivering for himself, it was revealed that there was no actual underground hero league, but the delivery was a setup in order to kill him. He was shot between the eyes by Tobias, who was acting as his buyer.[14]

Hawkeye seemed to have a radar-like sense, much like Daredevil once had, with the addition of his normal deadly accuracy. He was even able to drive while blind.

Seemingly those of Clinton Barton of Earth-616.

Hawkeye is blind due to cataracts.

A katana and custom-made bow, quick-release quiver, and a number of arrows.

Like this? Let us know!
Retrieved from "https://marvel.fandom.com/wiki/Clinton_Barton_(Earth-807128)?oldid=6076772"
Community content is available under CC-BY-SA unless otherwise noted.