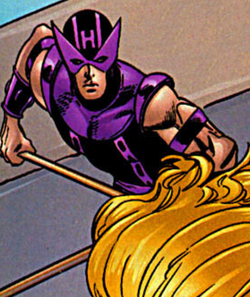 Hawkeye shared the same history of his Earth-616 Counterpart up until the birth of May Parker.

Clint and the other Avengers travelled to an alternate reality, Earth-9907, to prevent an invasion which resulted in the deaths and injuries of many of the Avengers including Clint who was blinded in battle.[2] He went on to found a dojo where he taught martial arts and marksmanship to Freebooter and Bluestreak among others.[3]

Hawkeye was one of the heroes abducted by Loki and brainwashed as part of a scheme to destroy the Avengers and other heroes.[4] In the aftermath of the battle many heroes were injured and Tony Stark felt that the Avengers needed extra help so he recruited former members Hawkeye, Ant-Man and the Scarlet Witch to help them, providing Hawkeye with a pair of goggles that enhanced his vision to superhuman levels allowing him to take readings of his surroundings and identify things, such as the Venom symbiote being merged with Normie Osborn.[5]

After a fight with Jim Rhodes Hawkeye and the other former Avengers decided to return to semi-retirement and instead serve as mentors and teachers for the current generation of Avengers.[6] He had continued working with the Avengers as a consultant and trained a temporarily disillusioned American Dream when Galactus endangered the universe and fought alongside the other heroes in the fight to stop him.[4]

Seemingly those of the Clinton Barton of Earth-616.

Enhanced Vision granted to him by a pair of high tech goggles invented by Tony Stark, they allowed the blind Hawkeye to see at superhuman levels.[1]

Like this? Let us know!
Retrieved from "https://marvel.fandom.com/wiki/Clinton_Barton_(Earth-982)?oldid=5344677"
Community content is available under CC-BY-SA unless otherwise noted.