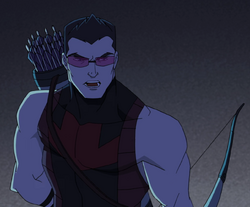 He had a similar origin to the one from his Earth-12041 counterpart but in this universe he became evil.

He has encountered Black Widow in the past and they actually teamed-up, but they stopped doing it when Hawkeye betrayed her.

He was later recruited by Tony Stark to defeat the Squadron Supreme.

Like this? Let us know!
Retrieved from "https://marvel.fandom.com/wiki/Clinton_Barton_(Earth-TRN524)?oldid=6082247"
Community content is available under CC-BY-SA unless otherwise noted.