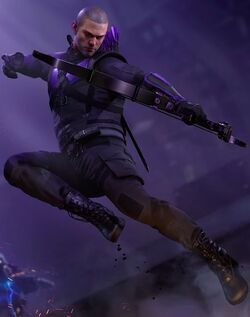 Clint Barton, code name Hawkeye, was an expert marksman and master archer well-known and renowned for his of use trick arrows, ranging from electrical shock to explosives. Barton served as a member of S.H.I.E.L.D. as well, working alongside Black Widow. At some point, they became members of the Avengers, working alongside Captain America, Iron Man, Thor and Dr. Bruce Banner AKA Hulk. Clint was also associated with fellow archer Kate Bishop and was training her to become a member of the team, sharing the Hawkeye identity with her.

Sometime before A-Day Barton left the Avengers. In the fallout, he tried to defend the team in front of congress, though ultimately failed due to Bruce Banner's damning testimony that the team was a danger to society. After the disbandment of the Avengers, Clint disappeared.[1]

Like this? Let us know!
Retrieved from "https://marvel.fandom.com/wiki/Clinton_Barton_(Earth-TRN814)?oldid=6083124"
Community content is available under CC-BY-SA unless otherwise noted.