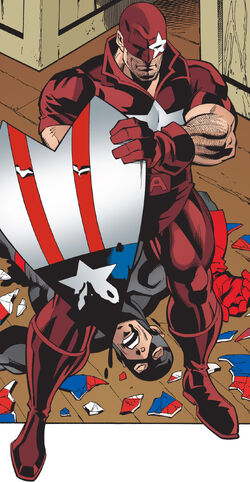 The man who was later to be known as Protocide was found in a SHIELD warehouse by three agents who were tasked with cataloging the various artifacts within. Unbeknownst to two of the agents, one of them was a spy for AIM, who then shot his 'colleagues' and escaped with the crate containing Clinton's body.[citation needed]

Upon discovering that Clinton's body contained a prototype version of the Super Soldier Serum that had resulted in his death, AIM set about bringing him back to life. Clinton was told his name is Protocide, since AIM had decided to name him after the fact he was a prototype. Forgoing any laboratory tests, they pitted him against three Battle Droids, which he defeated quickly and with ease.[citation needed]

Thanks to an AI construct, AIM discovered that he was formerly an Army recruit who killed his commanding officer. He was let out of lock-up by two rogue Generals to test Professor Erskine's formula. Unbeknownst to them, Erskine hadn't included two key ingredients in the sample used on McIntyre, which resulted in McIntyre's death. After resurrecting McIntyre, AIM gave him false memory implants. In these false memories, McIntyre was chosen personally by Professor Erskine as he was the perfect physical specimen, only to be later disposed of by Steve Rogers in Nazi-controlled Europe in order to allow Rogers to continue as the only US Super Soldier.[citation needed]

Protocide's first mission was to locate and engage US Agent, whom he defeated by stabbing his shield through US Agent's own one and into his chest, thus paralyzing him. He was next sent to obtain a chemical agent from a SHIELD convoy, where he fought and almost killed Captain America. He was ordered to forget landing the killing blow and get the compound. He was struck by Captain America from behind and had to escape being captured by SHIELD forces.[citation needed]

As Protocide, McIntyre was sent after every HYDRA safehouse that AIM could locate, and it was at one of those locations that he again faced Captain America. After being beaten by his foe, he and Protocide had to team-up to avoid being killed by the remaining HYDRA forces. Upon being struck by a beam from a neural shock beam, Protocide was knocked into the HYDRA energy core, only just catching a small ledge. Captain America managed to pull him free, telling Protocide that he had been given a second chance and should use his gift to make the world a better place. He used this opportunity to throw Cap into the energy core and left, proclaiming himself Captain America.[citation needed]

SHIELD tracked Protocide to a secret AIM bunker which Captain America invaded and again fought Protocide. Protocide managed to get the better of Cap, but upon stabbing his hand to get him to fall into the spinning blades of a helicopter, Cap managed to swing himself back onto the ledge. The Avenger then tossed his shield into the helicopter, slicing the blades free and sending the helicopter into a crash. The resulting explosion caused the base to begin to fall apart, almost sending Cap to his death. Protocide had managed to get a stable hand-hold and grabbed Cap as he fell, though it may just have been the basic human reaction of wanting to catch a falling object. As the base quickly approached its destruction, Protocide threw Cap out of it, leaving the Avenger to believe he had perished.[citation needed]

Protocide was last seen in civilian clothes, hitching a lift to "Anywhere. So long as it's far away."[citation needed]

Protocide is listed in the Civil War: Initiative as "presumed deceased". From this it is assumed the public and SHIELD at large believed he died in the explosion, and he has managed to make a life for himself away from the cowl.[citation needed]

Super-Soldier Serum: McIntyre possesses various enhanced physical attributes after ingesting a variant of the Super-Soldier Serum. However, McIntyre was only exposed to one of the three stages of the serum, and the variant he received was missing portions that were present in the perfected sample that Steven Rogers I received in order to become Captain America. McIntyre was already in a healthy and well conditioned physical condition prior to receiving the unrefined enhancement serum but the serum did actually "kill" him, shutting down his body into a long term susani state (not true death as his body did not decompose despite being in inactive status for decades before World War II until recent time). It was unclear if AIM did any later refinements to stabilize the chemicals in his body to work like those in Rogers I's body. However, it is clear that McIntyre has at least matching active capabilities to Rogers I as shown while in direct combat with Captain America, despite being actually superhuman in strength, speed and endurance.

Protocide is a skilled and formidable hand to hand combatant.

McIntyre possess all the limitations of a human male (will fail on lack of air, sleep, and rest) though due to his enhancement has superhuman endurance levels in all of these regards such as holding his breathe for nearly 20 minutes.

Protocide carried with him a Chevron shaped shield of unknown composition, though it is of an extremely durable metal alloy.

Like this? Let us know!
Retrieved from "https://marvel.fandom.com/wiki/Clinton_McIntyre_(Earth-616)?oldid=5834398"
Community content is available under CC-BY-SA unless otherwise noted.