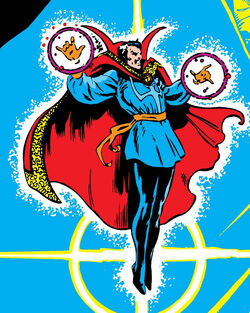 Enitharmon the Weaver once met the being who wove the Cloak of Levitation that would eventually become Doctor Strange's. Enitharmon described that being as far greater than himself.[2]

The red cloak was gifted to Strange by the Ancient One after prevailing in battle against Dormammu.[5] It was soon destroyed by the monster Zom in combat with Strange,[6] but Strange skillfully restored it soon afterwards in a feat that impressed the Living Tribunal.[7]

During the Empirikul's attack on magic and Doctor Strange's defeat, the Cloak was torn apart by the Empirikul's leader, the Imperator.[8] When Strange managed to be teleported away to safety, he retained a shred of the Cloak, which barely retained its magical properties and could not even fly.[9]

When Loki took the title of the Sorcerer Supreme from Doctor Strange, he recovered the cloak's rags and sewed it together with Asgardian thread he spun himself. Though repaired, the cloak's new many seams stood out plainly.[10]

Both Cloaks of Levitation grant their user the ability to float and fly, in a much more effective way than using a flight spell. The red Cloak is capable of reaching subsonic speeds, though must require some small extent of magic in the wearer to function, as shown when the magic-drained Doctor Strange fell to earth, his Cloak of Levitation unable to be controlled.[citation needed] It is also possible to use the Cloak while standing on it, in a similar way to a magic carpet.[11] Additionally, the Cloak responds to commands and can be directed even if not being worn.[citation needed]

The Cloak can also be used as shield, because of its durability, offering the wearer some protection,[citation needed] or as a weapon, due to its ability to ensnare opponents.[8] It can also alter its shape, being capable of grabbing onto ledges[9] and take the form of a scarf.[11] The cloak apparently can have its physical shape augmented, as Strange once modified the cloak into a kimono-like trench coat.

Like this? Let us know!
Retrieved from "https://marvel.fandom.com/wiki/Cloak_of_Levitation?oldid=6431477"
Community content is available under CC-BY-SA unless otherwise noted.