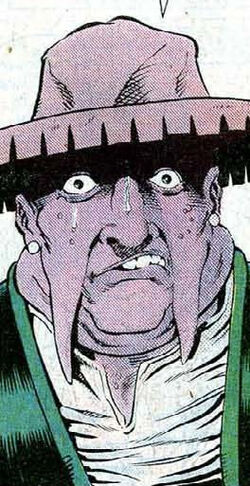 Clumsy Foulup was a less-than-competent member of the space pirate Captain Reptyl's crew, but betrayed his Captain when he realised that Reptyl was about to ally himself with the reptilian Skrulls against their enemies the Kree due to his hatred of mammalian life forms. Clumsy was manipulated by the Contemplator as part of his plot to seize control of the Kree Empire and ended up a hero of the Kree, but unfortunately for the Contemplator, Clumsy was not as dumb as he seemed and effectively hijacked his plan, setting himself up as leader of the Empire with the aid of a number of the pink skinned Kree and the telepathic Cotati.[1]

Clumsy was later deposed and killed by Ael-Dan and Dar-Benn.[2] They were later installed as co-emperors of the empire until they too were assassinated by Deathbird.[3]

Like this? Let us know!
Retrieved from "https://marvel.fandom.com/wiki/Clumsy_Foulup_(Earth-616)?oldid=5630701"
Community content is available under CC-BY-SA unless otherwise noted.