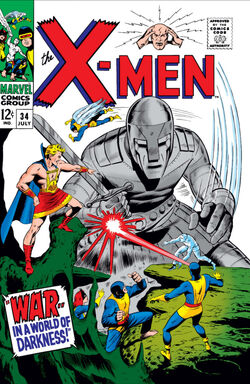 of Tyrannus at the time. The robot's mission was to destroy the Mole Man's robot made of diamond. The robot was successful in destroying Mole Man's robot, but the robot was then destroyed by the X-Men by knocking it into a lava pit when they arrived to rescue Roberts. Tyrannus couldn't understand how the Cobalt-Robot could lose, unaware that Roberts had sabotaged the robot.[1]

Like this? Let us know!
Retrieved from "https://marvel.fandom.com/wiki/Cobalt-Robot_(Earth-616)?oldid=6430887"
Community content is available under CC-BY-SA unless otherwise noted.