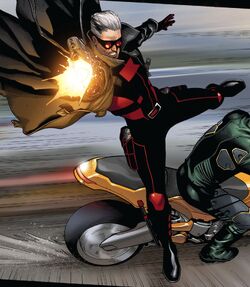 A Super Soldier from the 1920s and '40s, Codename: Bravo was part of a team built by Nick Fury along with Captain America, Peggy Carter, Dum-Dum Dugan and Jimmy Jankovicz to attack Hydra. However, Bravo grew to hate Captain America, as Peggy preferred Steve over him. After Jimmy used his powers to open a portal to Nowhere (a dimension different from ours), a Hydra agent bashed Jimmy's head in, rendering him comatose, and trapping Bravo along other soldiers in Nowhere.[1]

Return with a Vengeance

After many years trapped in Nowhere, he was able to escape when Jimmy waked from coma, and started working with Baron Zemo and Hydra to destroy Captain America, blaming him for his accidental imprisonment, as well taking Peggy Carter from him. This resulted in Bravo using a machine connected to the again-catatonic Jankovicz to enter Nowhere, where he trapped Captain America, and proclaimed himself king of this dimension.

Agent 13, Nick Fury and Falcon rescued Captain America with the help of Jimmy's last act of will and Bravo was imprisoned.

Under Hydra Queen's orders, Baron Zemo, along with Hydra soldiers, freed Bravo from the Raft. He joined them in a plot to unleash mobile, "Omega"-class Madbombs upon America, but when a gunshot from the Hydra Queen ricocheted off of Captain America's shield and struck him. Richard along with Zemo were taken into captivity.[2]

Bravo's strength was twice as strong as an Olympic-level athlete.[1]

On multiple occasions, it is revealed that he was shown using many weapons throughout his career.[7]

Like this? Let us know!
Retrieved from "https://marvel.fandom.com/wiki/Codename:_Bravo_(Richard)_(Earth-616)?oldid=6504599"
Community content is available under CC-BY-SA unless otherwise noted.