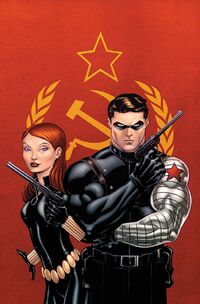 The Cold War was the continuing state of political conflict following World War II between the Communist World – primarily the Soviet Union and its satellite states and allies – and the powers of the Western world, primarily the United States and its allies. The Cold War era occurred on Earth-616 much in the same way as in the real world. Below details events that are unique to that universe.

A man who wanted to be as Captain America was surgically altered to look identical to Steve Rogers. He fought communists during the early 1950's, including a communist Red Skull. He was finally frozen by the scientists.

In many other countries, the communist influence began civil wars and revolutions. The year 1955 saw the starts of both the Korean and Vietnam Wars.

The Earth-616 universe operates on a Sliding Timescale, meaning that events in that universe happen much slower than in real time. As a result, events that were first published in the 1960s get "pushed forward" in time. Events published by Marvel Comics in the 1960s are said to have occurred roughly "ten years ago" in relative comparison to the current point in history. As such while a lot of early Marvel stories have events heavily influenced by the Cold War are considered "topical references" in relation to the date in which the story was published. Recent editions of the Official Handbook of the Marvel Universe usually generalizes specific events that are considered topical for the time in which the story was published.

For example, as per Fantastic Four #1, the historic rocket trip from which the Fantastic Four gained their powers was a result of the space race. However, by Fantastic Four #236 all references to Reed's "rocket trip" had been retconned as the space race had become a date references. In addition Reed's space craft is no longer referred to as a rocket and his purposes for going into space have since vastly expanded to be considered more fantastic, and less dated.

Other examples still maintain at least part of the original story telling. For example, in the Incredible Hulk #1, a Russian spy named Igor Drenkov was sent to America to steal weapons, aircraft and national secrets. Igor actions led to the accidental creation of the Hulk. Official Handbook of the Marvel Universe A-Z #5 (published in 2008) still references Igor as a Russian spy, however it is generally accepted that any Cold War references in that story are considered topical.

Tales of Suspense #39, which features the birth of Iron Man was originally set in Vietnam, during America's involvement in the Vietnam War. However since Iron Man Vol 4 #1 (published in 2005) retconned Iron Man's origins so that his injury occurred while in Afganistan and excised all references to the Cold War.

Likewise, Charles Xavier and Cain Marko were said to have fought in the Korean War as per X-Men #12. However this has since been generalized as an eastern conflict as early as Official Handbook of the Marvel Universe A-Z #6.

Retrieved from "https://marvel.fandom.com/wiki/Cold_War_(Event)?oldid=5162794"
Community content is available under CC-BY-SA unless otherwise noted.