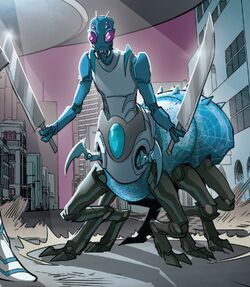 A robot shaped like a blue insectoid alien, Coldwar, alongside fellow bounty hunters Killer Thrill and Guzz, was hired to capture a particular klyntar that had made its way to Earth. His advice that they move to capture the klyntar while it was in a weakened state were repeatedly vetoed by the eccentric and maniacal Killer Thrill, who wanted to observe the symbiote's activities after it acquired a superhuman host.[1] When they finally attempted to apprehend their target, Coldwar was killed and devoured by the symbiote.[2]

Coldwar repeatedly suggested to Killer Thrill that they capture the Klyntar they had been hired to apprehend as quickly and efficiently as possible, revealing himself to be a pragmatic individual.[3]

Like this? Let us know!
Retrieved from "https://marvel.fandom.com/wiki/Coldwar_(Earth-616)?oldid=5464707"
Community content is available under CC-BY-SA unless otherwise noted.