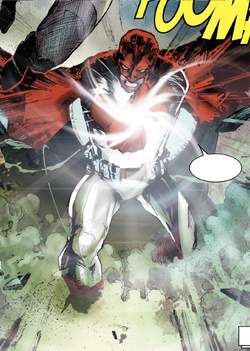 Chinook is a type of wind not a-- It doesn't matter. I tried to get out of it. I did. But I still wanted to... leave something behind. Thought I'd make art. Touch people with beauty. But there was something about my time as Wind-Shear. The look on the faces of people when I arrived. The feeling of being... bigger. I did... questionable things while I worked for Roxxon. But that didn't matter when I put on the mask. That "silly costume" makes me a symbol, not a man. Those "bright colors" can't be stained by past mistakes and regret. Those colors are a symbol, X-23, for the most uncomplicated, most untainted elements of what truly lies in our souls. In an age of mistrust and divisiveness, we need a few things that are just bloody simple and pure.

Colin grew up mostly in Canada, but moved to England with his step-father and mother in his pre-teens. He discovered his mutant powers as a teenager when he was attacked. He subconsciously used his powers to make the gym bag he was carrying have the weight of a brick and used that to subdue his attackers.[3]. He would later serve with the Canadian Armed Forces[2] before eventually coming to be a Roxxon super-powered employee.[4]

Ashamed of the villainous deeds he was forced to perform as a special operative for Roxxon Oil, Windshear quit and became an official member of Alpha Flight.[4] He served as an administrator and adviser to Beta Flight. During his time with Alpha Flight, Windshear gradually became more comfortable with the role of a super hero.

When the Canadian government disbanded Alpha Flight, Windshear retired from the super hero life and returned to his home in England, where he set up a curio shop that sold high-priced objects, created with his mutant power, that were only visible under special lighting.[5]

Hume was later revealed to be depowered.[6]

After being diagnosed with leukemia, Colin decided that being a sculptor wasn't for him anymore, he missed the life he lived as an adventurer and the feeling he got by helping people. Calling himself Chinook, Colin rescued X-23 after she got caught up in a gang fight at a club owned by the Pink Pearl in Toronto.

Taking her back to his place to recover, he explained to her why he still does it after everything he had been through. That the suit makes him a symbol, not just a man and the bright colors can't be stained by past mistakes and regrets. He reminded her of Logan, so X-23 decided to help Colin by taking out Pink Pearl at her hideout.[2]

None, Hume is a depowered mutant.

Colin has athletic strength allowing him to press up to double his body weight. While in his armor, he has Superhuman Class 10 strength, which allows him to press in the 2-10 ton range. It is unknown if his strength level increased when his armor was modified.

The weakness of Hume's mutation power is that he would be hit with psionic backlash if his constructs were destroyed.

Battlesuit: As Windshear, Hume wore a battlesuit developed for him by Roxxon Oil technicians to fully harness his power. Windshear's armor has electrically powered Turbojets built into the armor enable Windshear to better control his projection of "hard-air" molecules from his gauntlets and propulsive force from his boots and allows him to fly at subsonic speeds, later, his armor was modified when he joined Alpha Flight and was capable of reaching Mach 1. The battle-suit also increased his strength and gave him increased protection from injury. The suit also contained a communications and sensor array. Later, his armor was modified by Alpha Flight when they all wore identical red costumes as a team. The armor also has a retractable protective tinted acrylic glass/plexiglass faceplate and a radio communicator built into the helmet.

Like this? Let us know!
Retrieved from "https://marvel.fandom.com/wiki/Colin_Hume_(Earth-616)?oldid=6469283"
Community content is available under CC-BY-SA unless otherwise noted.