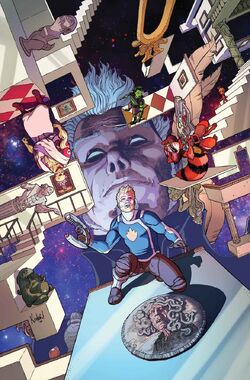 The Collector had a vision seeing powerful things that would rise, determined to destroy the universe. He decided to prevent this from happening and that he would dedicate his life to collecting artifacts and living beings throughout the universe to place them out of danger. Then, after the destruction of the universe, he could re-populate it and bequeath the knowledge and cultures from past. He built a great spaceship and began his work with the help of Gatherers, stopping on every world to collect a sample of its greatest achievements, as well as living representatives of each of their lifeforms.

In a matter of years, the ship was full and he had to stop in order to collect expanded facilities for his "permanent collection". Using robo-mechanics bought on planet Cron, the Collector transferred his collection. Every time his ship's hold became full, the Collector would return to his museum-worlds to place the new samples. He has currently filled up ten "museum-worlds" with artifacts from one-hundred-thousand planets. With the passing of eons, his monomania became more obsessive, until he forgot the original reason for his collection.[1]

The Collector eventually developed a traveling menagerie. This allowed him to showcase his new acquisitions, raise funds, and add more specimens to his collection. The Guardians of the Galaxy were temporarily imprisoned at this facility while it was stopped near Pluto.[2]

The Collector also has zoos of alien beasts which he can release to attack his adversaries.

The Guardians of the Galaxy - Mission: BREAKOUT! is an accelerated drop tower dark ride attraction at the Disney California Adventure Park set in the Collector's Museum Fortress.[10]

The Collector had a Museum on Knowhere. He housed the galaxy's largest collection of fauna, relics, and species of all manner. Tivan's collection comprised multiple sentient creatures including a Dark Elf, a Chitauri warrior, a Frost Giant, a Duckworldian, a Krylorian, a Rainer, and numerous others. Tivan also possessed rare and unique pieces such as an Evolutionary Cocoon, the Aether, Cosmo the Cosmonaut dog, and various skeletal and mummified remains of species.[11][12]

The Museum was damaged when Carina, in an act of defiance, laid her hand on the Infinity Stone within the Orb in an attempt to try and harness it's power. The ensuing explosion appears to have release most (if not all) of the Collector's specimens.[12]

The Museum was destroyed when Thanos came for the Aether, which was subsequently materialized into the Reality Stone. Expecting the Guardians of the Galaxy, namely Gamora, to come to stop him, Thanos used the Stone's power to create an illusion in which he was confronting the Collector. After Gamora killed his fake, Thanos lifted the illusion, disappearing the illusionary Collector as well. The fate of the real Collector is unknown.[13]

The Cosmic Conservatory was a school run by the Collector. Gamora compared the school to a museum or a prison than a school, since Collector collected young powerful beings around the cosmos himself and held them at the Conservatory as part of his collection. After Thanos had taken over the campus, Rocket Raccoon and Iron Man destroyed the school.[14]

Like this? Let us know!
Retrieved from "https://marvel.fandom.com/wiki/Collector%27s_Museum?oldid=6423769"
Community content is available under CC-BY-SA unless otherwise noted.