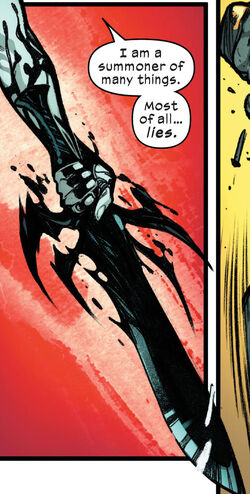 Named in the prophecy by Saturnyne,[1] Colony is the weapon of Summoner, the child of War.[2]

Following the death of the Summoner, the blade was left forgotten somewhere on Otherworld.[3]

The Summoner could summon the blade from his body whenever he wanted, and its amorphous structure allowed its wielder to shape into various similar weapons such as daggers.[1]

Like this? Let us know!
Retrieved from "https://marvel.fandom.com/wiki/Colony_(Sword)?oldid=6466129"
Community content is available under CC-BY-SA unless otherwise noted.