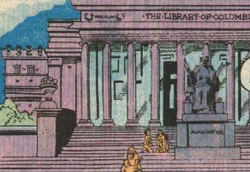 Reed Richards attended Columbia when studying for his sixth degree. He rented living quarters at the Manhattan boarding house owned by the aunt of a young girl named Susan Storm.[citation needed] The Quiet Man was a student at Columbia University, who had fallen in love with Sue Storm. After Reed Richards talked to Sue before he plucked up the nerve to do so, the Quiet Man became resentful towards Richards.[1]

Professor Charles Xavier completed his graduate studies at Columbia, where he received his PhD in Anthropology.[2]

Matt Murdock and Franklin Nelson were both accepted into Columbia Law school. The two were allocated roommates. Matt protected Foggy against bullies and helped him study. For the first six months of their rooming together Foggy snored very loudly, with Matt comparing him to a human foghorn. It was from then the nickname stuck.[3][4] When Matt began dating Elektra Natchios.[5][6] Foggy disapproved, because he thought she was dangerous (which turned out to be extremely true).[7] After Elektra left the university, Matt and Foggy transferred to Harvard Law School.[citation needed]

Professor Charles Xavier has begun giving lectures at Columbia University. Just as schools are closing for the Christmas break, Xavier was suddenly attacked by an anti-mutant mob. Attempting to defend himself with his mental powers fails and he is struck with a brick and beaten nearly to death. The mob flees and leaves him to die in the street. However, someone has witnessed the beating and has dragged Xavier away into a nearby alley.[2]... [8]

Vance Astrovik attended Columbia[9] but his college education was temporarily short after he killed his father and was sent to prison. Vance continued his education in jail, reapplied for admission at Columbia, they accepted his prison credits and allowed him to re-enroll.[10]

Matt Murdock and Foggy Nelson were roommates at Columbia University. Murdock took a Spanish class for the sole reason to meet Elektra Natchios.[11]

Matt Murdock enrolled at Columbia Law School, where he met and became enamored with Elektra Natchios. A string of violent occurrences at the school tore them apart, though. It started when one of Elektra's friends was raped by an influential, rich boy named Trey. Her friend went and pressed charges against Trey, backed up by Elektra, but Trey's father had them buried. Unable to accept that, Elektra snuck into his room one night and threatened Trey; something that only earned her and her family more pain when Trey hired thugs to burn down her father's business. Matt managed to draw a connection between the thugs and Trey, having him arrested again. And, once again, the charges were dropped. Deciding that he would never stop, Elektra tricked Trey into a confrontation. As soon as Matt caught wind of it, he intervened to try and save Elektra's life... and keep Elektra from becoming a murderer. Refusing to listen to someone she didn't know, Matt had to reveal himself to Elektra - and his abilities - in a bid to gain her trust. Unfortunately, it only served to condemn him somewhat; she couldn't trust someone who had been lying to him through omission for this long. She cut Trey's femoral artery and fled, leaving Matt a choice; go with her, or save Trey's life, effectively ending things between her and Matt. It wasn't any choice at all. Even when it was someone like Trey, he couldn't let him die.Elektra withdrew from the college.[12][13]

Peter Parker attains his powers after being bitten by a radioactive spider at a laboratory at Columbia University.[14] He later attended Columbia University rather then Empire State University. He attended class taught by Curt Connors. But his superheroics were effecting his grades.[15] He later took a sample of the Venom Symbiote to Connors lab for study. He also started dating fellow student Gwen Stacy to get back at Mary Jane Watson.[16]

On Earth-7642, Professor Skart hosted semester debates. In one debate, Matt Murdock went against Harvey Dent from Gotham City College. While the two walked around the campus, Dent jumped on a balance on a Lady Justice statue and convinced Murdock to jump on the other side, as a metaphor for risk taking and the law needing lawyers like them to be fair.[19]

Like this? Let us know!
Retrieved from "https://marvel.fandom.com/wiki/Columbia_University?oldid=5859619"
Community content is available under CC-BY-SA unless otherwise noted.