The Coming of Gah Lak Tus 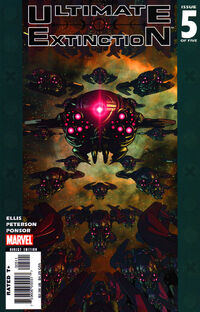 Aliases
The Coming of Galactus

1904. The Tungus River Valley, Russia. A giant meteor crashes down, destroying everything in its landing.

1927. Two Russian men walk into the drop-zone, the first humans to walk there in over twenty-three years. They are astonished when they see something.

2004. A young woman is trying to watch television, but the reception keeps fading away. However, when the reception returns, there are 10 images. 1st: A solar system. 2nd: An alien city. 3rd: The worried eyes of an alien. 4th: Every alien astonished and frightened at what they are seeing. 5th: The same image as the 1st. 6th: The same image as the first and 5th, with the exception that the Solar System is missing. 7th: Tears emerge from the alien's eyes. 8th: Some sort of blast hits the planet. 9th: Everything falls down. 10th: Everyone dies. The sound of the screaming from the alien's makes everyone shiver. Two more images show up: The planet breaking apart, and the planet gone. As every television, cell phone, or just any screen is interrupted with the broadcast of the images, and the horrible screaming of the alien, there is a voice: "No... no escape... no escape... It comes... and there's no escape... all the stars go out... you are already dead... it comes and you are all dead... we are all dead... listen... there is only death for you... there is only small life... then there is this... we he I send this tell this warn this... there is only horror now... there is only death now..." These words are shown as we see all the aliens dead, rotting in piles. On Earth, many people are committing suicide, not wanting to face what comes next. At the Xavier institute, Jean Grey wakes up, just from dreaming the same recording everyone saw. Jean runs to Xavier, who also dreamt it. Xavier uses Cerebro to find out that the recording is coming from Russia. Xavier asks Jean to get Wolverine and Colossus. At the Triskelion, Nick Fury also knows the recording is coming from Russia. Fury recruits Ultimates members Captain America and Black Widow. Nick Fury also notes that they are recruiting Samuel Wilson, a.k.a. the Falcon, for the mission. In the Amazon, Nick Fury calls Sam for the mission. Sam agrees, taking his wings out his back-pack, attaching them, and then flying off a cliff.