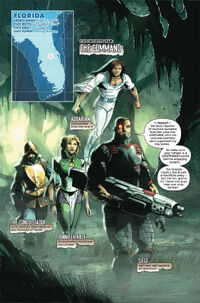 Base of Operations
Florida
Affiliations

The Command is a government-sponsored super-hero team created for the state of Florida as part of the 50-State Initiative. As A.R.M.O.R. is located in Florida, they work closely with A.R.M.O.R.

While the team investigated a disturbance in the Citrusville swamp (home to the Nexus of All Realities and Man-Thing), Siege was bitten on the face by a zombie Deadpool and despite his cybernetic nature was quickly turned into a zombie as well. He attacked Jennifer Kale, making lewd references to her undergarments "and what's beneath those and what's beneath that and what's beneath that." His onboard computer had alerted A.R.M.O.R. to the fact that he was seemingly malfunctioning, and triggered his self-destruct mechanism. Conquistador was ripped apart by zombies after they realized he wasn't made of flesh and blood.

Both Aquarian and Kale (who was suffering from a catatonic shock) were brought back to A.R.M.O.R. central command, The Hollow, to receive the medical attention they needed.[1]

Conquistador was replaced on the team by a second Conquistador, who was then secretly captured by the Skrulls, who substituted one of their own in his place. When the Skrulls "secret invasion" was revealed, the Command were assisted by Komodo and Riot in taking out the Skrull infiltrator.[2]

Retrieved from "https://marvel.fandom.com/wiki/Command_(Earth-616)?oldid=5545798"
Community content is available under CC-BY-SA unless otherwise noted.