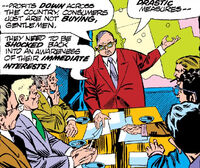 The Committee was a secret organization of anonymous businessmen and financiers. Their purpose was to stimulate what they perceive to be a sinking global economy by any means available to them. Many of the Committee's practices are ethically questionable, and usually illegal. To promote consumerism, Committee members were known to implement a doctrine of fear to "shock" the private sector into investing in various enterprises. One of the earliest examples of this practice involved their decision to employ the disfigured Sarnak, Master of Sound, to create "an army of fear" so that citizens spend more because they feel unsafe. These efforts brought the Committee into conflict with Jack Russell – also known by the sobriquet, the Werewolf by Night.[2] The Committee's involvement with the Russell family included Jack's stepfather, Philip Russell – who was being blackmailed via his wife Laura. When Philip refused to pay, they had her killed[3] - leading Jack to believe that his step-father had been responsible.

The Egyptian God of Vengeance, Khonshu, felt that his avatar Moon Knight had lost the drive to act as his instrument of vengeance. As Moon Knight's spirit began to falter, so too did Khonshu's power. Khonshu influenced the sons and daughters of the Committee to re-establish themselves and embark upon a course of action to secretly revitalize Moon Knight. The individual Committee members were ignorant of Khonshu's subtle influence over them, but their desire to avenge their predecessors against Moon Knight was strong.[5]

They hired the mercenary known as Bushman to mutilate Marc Spector, but with instructions to leave him alive. Bushman succeeded in this task, but at the cost of his own life. Crippled and broken, Marc Spector fell into a state of despondency and chemical dependency.[6]

The Committee meanwhile initiated the second phase of their plan to destroy Moon Knight. They hired a consultant known as the Profile who provided them with a detailed psychological analysis of Marc Spector's state of mind. The Committee acted upon this information too quickly however and sent a hired gun to severely beat up Marc's close ally, Jean-Paul Duchamp and make it look like a random act of violence. Rather than weakening Spector's resolve even further, the attack against Jean-Paul actually gave him a reason to live.[7] Although this permutation ran counter to the Committee's designs, it served to satisfy Khonshu's goals. His instrument of vengeance was back.[8]

The Committee attempted to clean up their mess by hiring the Taskmaster to take Moon Knight out. The Taskmaster raided Spector's apartment but was unable to kill him. Spector piloted his Moon-chopper to the Committee's Manhattan headquarters and flew the chopper directly into their office. Miraculously, all of the Committee members survived the attack.[9]

Retrieved from "https://marvel.fandom.com/wiki/Committee_(Earth-616)?oldid=5545804"
Community content is available under CC-BY-SA unless otherwise noted.