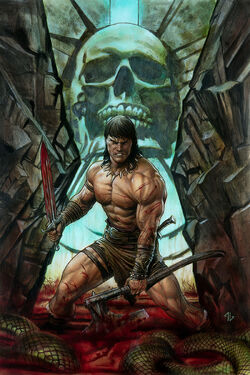 Know, O prince, that between the years when the oceans drank Atlantis and the gleaming cities, and the rise of the sons of Aryas, there was an Age undreamed of, when shining kingdoms lay spread across the world like blue mantles beneath the stars. Hither came Conan, the Cimmerian, black-haired, sullen-eyed, sword in hand, a thief, a reaver, a slayer, with gigantic melancholies and gigantic mirth, to tread the jeweled thrones of the Earth under his sandaled feet.

Conan was born in Cimmeria, a northern kingdom of barbarians, among the Snowhawk tribe. All of his chronicled adventures take place in the Hyborian Age. At the age of fifteen, Conan fought in the Battle of Venarium. After this, Conan, went on several adventures as chronicled in the The Nemedian Chronicles, and eventually came to be the king of Aquilonia, one of the most powerful kingdoms of the Hyborian age.

He battled for, with, and/or against numerous factions (including most of the nations of the Hyborian world, among them Aquilonia, multiple Corinthian city-states, Turan, Zingara, the Aesir, and the Picts), he fought alongside other adventurers, thieves, and pirates such as Bêlit and the Black Corsairs, the Kozaki and the Vilayet Pirates, Juma, Red Sonja, the Zuagirs, the Red Brotherhood, Zula, and Fafnir, among many others.

He battled numerous sorcerors and cults (among them the Stygian wizards Thoth-Amon and Kulan Gath, and the Witch-Men of Hyperborea), monsters, gods, and demons (including some of the Old Ones), and was helped as well by many of those, including the priest of Ibis Karanthes, the sorcerer and half-god Zukala, the albino sorcerer-king Elric of Melniboné, and the god Mitra.

After many years of ruling Aquilonia, Conan abdicated in favor of his son, Conn, and departed across the Western Ocean[47] to investigate mysterious forces which menaced Aquilonia, and discover new lands to explore, such as Antillia,[8] the isle of Na'at,[15] Mayapan,[91] and possibly Zothique.[15] His ultimate fate is not recorded.[47]

For a complete history of Conan, see Conan's Expanded History

Conan followed a rough code of honor throughout his life. Although willing to engage in acts of thievery and mercenary work, he remained loyal to those he genuinely saw as comrades. Conan was an unrepentant womanizer for much of his life, but he remained respectful of women. He was at times shocked by how "civilized" people of his era sold their daughters and treated them like property.

Conan was a fiercely proud man, preferring death to surrender. As a young man, Conan would kill a man for insulting him, although by middle-age he had mellowed somewhat to the point that he allowed the poet Reinaldo to vilify him in ballads, partially out of a belief that poets were more powerful than monarchs, and partially out of fondness for the mad poet’s art.

As king of Aquilonia, Conan showed genuine love and concern for his subjects. He once boasted that under his rule "no Aquilonian noble dares maltreat the humblest of [his] subjects."[96]

While Conan was considered a usurper king due to his lack of royal ancestry, he considered himself better than several hereditary monarchs of his era, and mocked their "divine right to rule:
"Gleaming shell of an outworn lie; fable of Right divine
You gained your crowns by heritage, but Blood was the price of mine.
The throne that I won by blood and sweat, by Crom, I will not sell
For promise of valleys filled with gold, or threat of the Halls of Hell!"[96]

Mala was his childhood love,[97] and Conan thought her as possibly the woman of his life.[98]

At fifteen, seemingly unknowing of the ways of love, he was seduced by Ursla who made him a man.[99]

Queen Isadona of Sakyara, Zamora, intended to share a night with her, but rejected him when he mentioned having done it in the past with Queen Vammatar.[103]

He tried to approach Sonja, who repelled his advances to later,[74] then totally.[104]

Though he declared that he had never forced himself on a woman,[105] he once attempted to rape Atali, daughter of Ymir,[44] and was tempted to force himself on Isparina.[106]

Early in his career, Conan was told by the priest of Mitra Ixastophanis to learn and speak the names of other deities than the northern gods, to flatter them,[123] that they might welcome the attention[124] if they truly exist, and no harm done if they didn't.[124][123]

Still, short after that time, he sometimes disdained other people's invocations of Mitra[59] (despite his later frequent invocations of his name and later confession that he would light a candle to Mitra if he was able to slay a monster by the blade alone),[97] and of Tarim[56] (as well as his idols),[55] but was admirative when Fafnir's invocations of Ymir, Bragi, and the Gods of the North when he seemingly accomplished a feat of great strength.[73]

He soon learned to be wary about offending gods,[125] and declared that he feared all the gods (but not their statues or idols).[126] At 30, he was known as a man who didn't mock the gods, especially those unknown to him.[127]

Whatever the situation called for at the time.

He used a vast variety of suits, from torn tunics to heavy armors. Among the most iconic were the helmet with which he left his village, and the pendant that belonged to Rion of the Laughing Visage.

A wide variety of bladed weapons, though he usually preferred a two-handed Broadsword.[citation needed]

He has traveled on various ships, including the Wastrel, the Tigress, the Hawk, the Winged Dragon and the Red Lion.

Like this? Let us know!
Retrieved from "https://marvel.fandom.com/wiki/Conan_(Earth-616)?oldid=6548961"
Community content is available under CC-BY-SA unless otherwise noted.