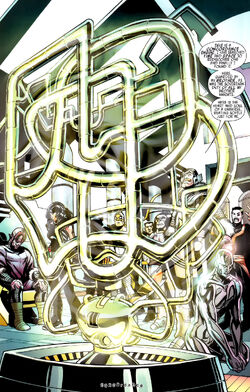 According to Prester John, the Concordance Engine is a reality-warping device, that can shape time, space and universes. It is the heart and soul of a universe, the map of everything, and if it would be destroyed it will lead to the destruction of the universe.[2]

There are at least five such devices. One was hidden beneath the Wundagore Mountain, and guarded by Prester Omega. The Defenders stole this device and transported it and Prester to New York in Stephen Strange's Mansion.[3] The second was used as an engine for Captain Nemo's Nautilus.[1] The third was once guarded by Prester John, but he lost it.[2] One was discovered by the Prince of Orphans and his companions in the North Pole. Another was turned by the Prince into King Solomon's Frogs.[4]

Fight To Save Everything

In a narrowly-averted alternate timeline, Dr Strange and the Silver Surfer uncovered the truth. The machines were built by a group of superhumans called the Presters from an alternate universe where the Celestials had become cosmically suicidal. These "Death Celestials" destroyed their universe and then others. The Presters had escaped and observed the sporadic things in the other universes which had temporarily held back the Death Celestials, and then used the Concordance Engines to recreate those elements on Earth-616. Their intention is to make that Earth into an armory or redoubt against this ultimate cosmic menace.[5]

The idea of all characters occuring on Earth being caused by the Concordance Engines is also likely to be true on Earth-616, as the divergence is only the engines are not discovered. However, there hasn't been a story exploring this.

Like this? Let us know!
Retrieved from "https://marvel.fandom.com/wiki/Concordance_Engine?oldid=6437576"
Community content is available under CC-BY-SA unless otherwise noted.