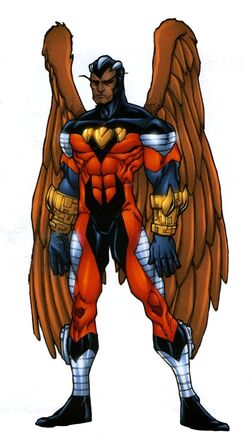 Condor was a brilliant member of the Bird People who wanted to become a crime lord. He found an amnesiac Xandarian known as Powerhouse and tricked him into helping with his schemes.[1] He also recruited a criminal named Diamondhead[2] and brainwashed Nova into helping them. Together they fought the original Sphinx and were defeated promptly. For his insolence Condor was turned into an actual Condor.

Years later Bird-Brain of the Ani-Men used the Ani-Mator's machines to turn the Condor into a bird-like humanoid with more animal characteristics than he originally had. Condor once again came into conflict with Nova and was defeated.

Flight: Condor possesses the superhuman ability to fly by means of natural wings and are fully feathered like a bird's.

Aerial Adaptation: Condor's anatomy is naturally adapted to flying. His bones are hollow like a birds, making them weigh far less than usual for a human. His body is virtually devoid of fat and possess greater proportionate muscle mass than an ordinary human does. His eyes are specially adapted to withstand high-speed winds which would hurt the average human eye. He also possesses a special membrane in his respiratory system enabling him to extract oxygen from the air at high velocities or altitudes.

Like this? Let us know!
Retrieved from "https://marvel.fandom.com/wiki/Condor_(Bird_People)_(Earth-616)?oldid=4366776"
Community content is available under CC-BY-SA unless otherwise noted.