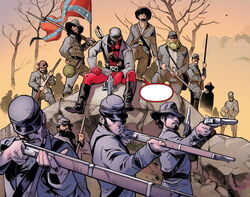 The Confederate States of America (CSA), commonly referred to as the Confederacy, was a confederation of secessionist American states existing from 1861 to 1865. It was originally formed by seven slave states; Mississippi, Louisiana, South Carolina, Georgia, Alabama,Florida, and Texas in the Southern region of the United States of America whose regional economy was mostly dependent upon agriculture, particularly cotton, and a plantation system that relied upon the labor of African slaves.

The Mutant; Jeb Lee served in the Confederate States Army and was collected by Apocalypse and "stored" for later use as the Pestilence of his Final Horsemen.[1]

Richard Trask had been a Colonel in the Confederate States Army during the Civil War. While a good tactician, Trask was also a ruthless and merciless opponent on the battlefield. After the war, Trask took a group of former soldiers who remained loyal to him, garbed them in masks and hoods, and headed westward, offering out his services to those willing to pay for them.[2]

Aloysius Thorndrake was a Confederate Soldier who was sent along with some other soldiers to apprehend a John Steele, a Union spy at the time. They chased Steele into Texas where they believed to have cornered him in until he vanished into thin air. Thorndrake and his men then proceeded to follow where Steele disappeared.[3]

During the American Civil War, the Ghost Rider finds Confederate officer Travis Parham avenging the murders of his friend, an ex-slave named Caleb and Caleb's family by a group of marauders led by George Reagan. Parham meets a horse-riding Ghost Rider who seeks the same men. Eventually, Parham learns about the deaths instrumental in helping set forth the Spirit of Vengeance.[4]

On Earth-717; Union soldier Stephen Rogers became the first Captain America during the American Civil War where he led the Union's victory over the Confederate States of America a year earlier in the war; ensured Abraham Lincoln's longevity in his second term; a successful Reconstruction era; and prevented the Indian Wars from happening.[5]

On Earth-42466 Deapool timetraveled to Gettysburg in 1862. Now in 1862, Deadpool allied himself with a battalion of soldiers from the Confederate Army. The changes he made back in Germantown] had affected the timeline allowing the soldiers to have tanks and robots during the American Civil War. This gave Deadpool a huge advantage over Cable and his group after they showed. Deadpool and his soldiers kept the mutants, Warpath and Domino at bay with the advanced technology while Cable traveled back to 1777 to check on the others. [6]

Like this? Let us know!
Retrieved from "https://marvel.fandom.com/wiki/Confederate_States_of_America?oldid=5515136"
Community content is available under CC-BY-SA unless otherwise noted.