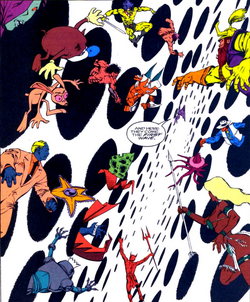 The Congress of Realities has representatives from nearly every reality in existence. An organization with representatives from trillions of realities.[1][2] It is an organization whose temporal domain is approximately twice as large as that of Kang the Conqueror, with nearly ten times as many member worlds.[3][4] The temporal dominion is as the name states, a democracy.[3]

When the Nexus of Realities was damaged, threatening the various temporal and multiversal realms, the demon Thog manipulated the Congress of Realities to agree to his plan to merge the realities. Which would give them domination over them, becoming gods. When the Man-Thing destroyed Thog, the warriors sent along with him fled.[1][2]

The Deviant Ereshkigal who gained the power of the Star Brand convinced several Nexus Guardians to join her, in an attempt to force the Living Tribunal to give up control of the Multiverse. The Guardians would then be able to run their respective realities as they desired. Ereshkigal failed in her gambit, destroying herself.[5] The Congress of Realities was one of the temporal empires that were kept occupied by the machinations of Kang so that they would not interfere in his plans so he could consolidate his power.[6]

varied, dependent on their reality and the level of technology of said reality and point in time.

varied, dependent on what reality and time period they come from.

varied, dependent on the point of time and the reality.

Like this? Let us know!
Retrieved from "https://marvel.fandom.com/wiki/Congress_of_Realities_(Multiverse)?oldid=5873529"
Community content is available under CC-BY-SA unless otherwise noted.