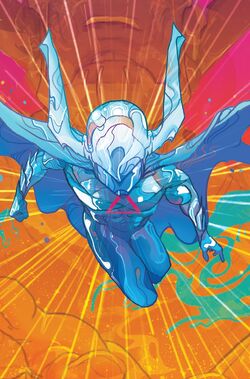 Conner Sims was a veteran of the Korean War, a member of the US Marine Corps along with his best friend, Adam Brashear. Conner and Adam were more like brothers than friends, they were each others' godparent for their children, and Conner fought bigots that mistreated Adam. They later became the project lead on a scientific attempt to harness anti-matter through the creation of a "Negative Reactor" which created a bridge between the Negative Zone and the positive matter universe.

This reactor would then allow for an almost unlimited source of clean energy by allowing devices to tap the energy generated by a stable event horizon balanced between these positive and negative universes. Due to the unexpected explosion of the reactor, both Brashear and Sims were subjected to mutagenic radiation generated by the then unstable event horizon. While Sims' body disassembled into energy, Brashear became a stable "antimatter reactor" and developed a set of superhuman abilities. Conner became an unstable source of anti-matter, and this instability made it impossible for him to remain within the realm of existence for long. During that time in the realm, he learned his brother was killed by members of the Ku Klux Klan while working undercover for the FBI.[1] The combination of his powers, losing his brother and seeing his friend Adam being discriminated against caused Conner's mind to fracture and eventually snap, resolving to destroy the people who perpetuated the racist standards of his time.

On June 4th, 1962, was the date of the beginning of the end of the Blue Marvel's superhero career at the hands of Anti-Man. The brutal battle revealed Adam's true colors literally. Anti-Man had inadvertently caused portions of the Blue Marvel's suit to be torn away, revealing his dark skin. That June battle claimed Blue Marvel's career and had ended Conner's life or so Adam and the rest of the world thought.[2]

Anti-Man returned with the same intentions as before but now his powers had grown exponentially. He single-handedly defeated the Mighty Avengers, whom consisted of Iron Man, Sentry, Wasp, Wonder Man, Ares, and Hank Pym. Luckily for the Avengers, Conner was unable to stay long, but after his disappearance the Avengers began their search for the Blue Marvel.[3]

After researching, convincing, planning and waiting, the Blue Marvel and Mighty Avengers were ready for Anti-Man's inevitable return. Prior to his return, anti-matter storms began to appear across the world, destroying cities and killing many civilians. Anti-Man finally returned attempting once again cleanse the world. He believed the world had forced him to judge because he did not think his ideal world of equality was possible. Instead of giving the world Heaven, Conner decided to give them Hell. Mr. Fantastic and Iron Man were armed with weapons designed to affect Anti-Man's unstable molecular structure but they and the others only seemed to slow him down. The battle took a dramatic turn when Adam arrived on scene.[1]

Adam commanded his allies to certain tasks to help him create a cyclone in order to generate a particle accelerator to dispel Conner. Anti-Man, now at a more equal level with Adam, took the fight to the the sky so Adam could sync powers with Conner to finally defeat him. Their battle continued to escalate and Adam revealed how he pitied Conner. Blue Marvel forgave his former friend, and proceeded to release him, seemingly killing him for good.[4]

Though thought to have been dissipated indefinitely, Conner Sims reformed in an outer dimension called the Exo-Space, which existed outside of reality. When the Ultimates were making a visit there, they encountered the Anti-Man, to Blue Marvel's surprise.[5] Blue Marvel initially decided to kill the Anti-Man, claiming that he was too dangerous and powerful, though he also appeared to wish to kill him in revenge for the lives he took. Adam was convinced to stop by his son Kevin, another inhabitant of the Exo-Space. Instead, Adam brought Conner back to his ship, and set out to fix him.[6]

The Ultimates continued their journey together with Sims, but they were stopped shortly before reaching their destiny by Galactus, who wanted to prevent their mortal minds from witnessing the true full scope of all reality. Galactus was forced to send them back to Earth when Anti-Man reached a state of hyper-awareness and started to panic after discovering that Eternity was chained.[7]

Sims was kept in a prison cell specifically built to contain him beneath the Triskelion, where his attempts to reveal that reality was caged were quickly prevented by an outside force who silenced Sims when he tried to warn the Ultimates.[8] A fellow prisoner of the Ultimates, Thanos manipulated Conner into breaking out of his cell.[9] After fleeing Earth,[10] Sims launched himself outside the Multiverse, where he was found by Galactus. Galactus used his newfound powers as the Lifebringer to turn Sims into his first Herald of Life. Sims was then sent by Galactus to recruit the recently-disbanded Ultimates in order to help him discover who had imprisoned Eternity.[11]

After reassembling the Ultimates, Anti-Man accompanied Galactus when he attended his trial before the Living Tribunal to determine whether he would be allowed to remain as the Lifebringer or be forced to become the World Devourer, as the prosecuting faction of Master Order and Lord Chaos wanted. The trial took a dramatic turn after the Living Tribunal ruled in Galactus' favor, and Master Order and Lord Chaos joined forces and killed the Living Tribunal to establish themselves as top of the universe's heriarchy in order to force their will.[12] The Anti-Man was sent by Galactus to warn the Ultimates, but was badly injured when he returned to their plane of existence.[13]

Having merged into a new cosmic being named Logos, Master Order and Lord Chaos managed to revert Galactus to his status of devourer, and he was set loose on his own ship, where the Ultimates and Anti-Man were. After Blue Marvel and Spectrum combined their forces to heal Anti-Man, Sims returned to his master all of the power he had been imbued with. Even though Conner sacrificed himself in the process, he saved Galactus and turned him back into the Lifebringer.[14]

Anti-Matter Energy Absorption: Like the Blue Marvel, Conner's powers are derived from the energy released caused by anti-matter emitting from a ground outside of reality called The Neutral Zone.[15]

Anti-matter is the same as normal matter except that the sub-atomic particles are the opposite charge therefore, anti-matter and normal matter cannot coexist without exploding. An accident at a lab caused Mr. Sims to be the second human anti-matter generator and reactor. However his matter/anti-matter coherence is unstable, constantly causing him to fade in and out between earth space and neutral space resulting in his mental instability. Nonetheless the processes where he gained his abilities renders his form unaffected by anti-matter.[2]

He is considered as an Omega-Level.[13]

Power Cosmic: After having been touched by The Seeder of Worlds, Conner had been remade as his newest herald to serve and protect all life within the caged universe. With it all of his original powers have been vastly augmented beyond their original limits, but to what extent these enhancements reach yet remains to be see.[16]

Superhuman Strength: Having enough raw physical might to do battle with an entire team of Avengers and decimate the entire roster during their first encounter with him.[2] His physical strength is enough to overpower beings as physically powerful as Sentry, Ares, Wonder Man, She-Hulk and the Blue Marvel himself.[2]

Nigh Invulnerability: He is capable of withstanding blows from a large collection of top-tier strength superhumans made up of Ms. Marvel, Ares, Iron Man, Wonder Man, She-Hulk and Sentry unharmed.[2]

Superhuman Stamina: Anti-Man's enhanced musculature is far more efficient than that of a human. As a result his muscles produce no fatigue toxins thereby granting him theoretically unlimited stamina.[2]

Superhuman Speed: Conner can move and react faster than the finest human athlete, being able to doge Blue Marvel's blows with relative ease.[16]

Healing Factor: Despite his nigh invulnerability to injury, it is possible to injure Anti-Man. If injured, his body is capable of quickly repairing damaged tissue with much greater speed and efficiency than the normal human body. This is supported in part because Anti-Man's body is capable of state-shifting between matter and energy, allowing him to reconstitute himself even after being dispersed.[2]

Pan-Dimensional Phasing: Tumultuously caught between here and another end of reality, causing him to shift between dimensions by willing himself into existence.[3] With the Power Cosmic bolstering him, he now has voluntary control over this aspect. Anti Man can now warp to and from different locations across reality as well as other points in universe, having transported multiple people to and from a given area in set space.[16]

Matter/Anti-Matter Manipulation: As can Adam, Anti-Man is a focal point of Matter and Anti-Matter collation and as such he can generate and manipulate both aspects of natural physics at will.[2]

Hyper-Cosmic Awareness: Conner is capable of experiencing events that happen in his future, such as having flashes of a fight against Blue Marvel one year before it happened.[6] His mind is also capable of grasping the full scope of all of reality,[8] being able to observe the Omniverse in a scale the mind of a regular human wouldn't bear.[7]

Like this? Let us know!
Retrieved from "https://marvel.fandom.com/wiki/Conner_Sims_(Earth-616)?oldid=6190862"
Community content is available under CC-BY-SA unless otherwise noted.