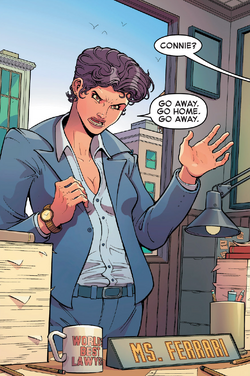 Connie was a noted defense lawyer in the New York area. She became romantically linked with Captain America (Steve Rogers). Although the two enjoyed a lengthy relationship, Connie's legal aid to noted criminals such as AIM and her brother David Ferrari eventually became a source of friction between the two, as Steve couldn't reconcile Connie's willingness to allow even such noted criminals their day in court even when he knew that they were guilty of unspeakable crimes.[1]

Steve Rogers' mixed emotions towards his former girlfriend Sharon Carter probably did not further their relationship either. After leaving Steve when she found herself unable to cope with the revelation of his real identity as Captain America, Connie was last seen living in Ohio. She had passed the bar in that state and had plans to set up a practice there.[2]

Several years later, as a consequence of major shake-ups in Stark Holdings, the ownership of the trademark for the Avengers name was transferred to the only other entity who had also applied for the trademark, Flatman. Connie, who had become the legal representative of the Avengers, attempted to negotiate with him to buy the name back, and Flatman managed to get her to reinstate the Great Lakes Avengers as a permanent and official addition to the Avengers.[3]

Retrieved from "https://marvel.fandom.com/wiki/Connie_Ferrari_(Earth-616)?oldid=6472265"
Community content is available under CC-BY-SA unless otherwise noted.