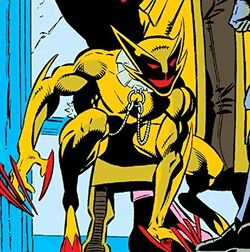 Conrad Mack's father, Collier, fought in the Vietnam War with his military unit, the Half Fulls. He and his fellow soldiers stumbled upon an ancient temple that was home to the Dragon's Breadth cult. After some coercion from the magics of the cults leader, Tai, Collier fell in love with one of the brides of the cult. He married her, and they had a son named Conrad.

Conrad was taught by his father in the skills that he learned during the war. Conrad also found a way to utilize his claws in battle. He was later found by the Left Hand, his father's former comrade, living on the streets because his feral nature made it hard for Conrad to interact with other people.

Like this? Let us know!
Retrieved from "https://marvel.fandom.com/wiki/Conrad_Mack_(Earth-616)?oldid=6119144"
Community content is available under CC-BY-SA unless otherwise noted.