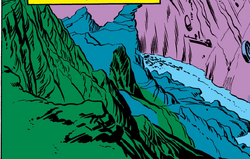 The Copperhead Canyon is a park area inhabited by an Apache tribe, who claim and demand property rights of their land.

When cycle daredevil Johnny Blaze was planning to jump the Copperhead Canyon and decided to look over it, he was attacked by Snake Dance and his "Snake Men". When Snake Dance transformed into a giant snake and chased after Ghost Rider, Ghost Rider jumped over the canyon. However, reaching 100 mph caused his motorcycle, sabotaged by Sam Silvercloud, to explode sending Ghost Rider falling into the canyon instead[1].
Thanks to Satan, Johnny Blaze survived and woke up the next morning at the bottom of the canyon, while his girfriend Roxanne Simpson was being kidnapped by Sam Silvercloud and brought to Snake Dance for a ritual. With both of them still missing, Bart Slade was about to do the canyon jump, but that night Johnny showed up as Ghost Rider and stopped Bart from jumping over the canyon; however he crashed during the show when he spotted Sam Silvercloud in the crowd. Chasing after Silvercloud, Ghost Rider found the ritual in which Snake Dance had his snakes bite Roxanne to see if she would survive the snake's venom. Destroying the snakes and the ritual, Ghost Rider speeded off with Roxanne[2].
After his defeat, the Apache tribe that once worshipped Snake Dance, was then about to hang him, when he was saved by the timely arrival of his daughter Linda Littletrees. Linda, who was the fiance of Sam, told everyone off and took Snake Dance's anti-venom, rushing to the hospital to cure Roxanne[3].

Like this? Let us know!
Retrieved from "https://marvel.fandom.com/wiki/Copperhead_Canyon?oldid=5428668"
Community content is available under CC-BY-SA unless otherwise noted.