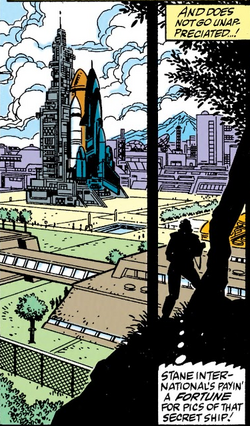 Cordco, Inc. is a Long Island research firm affiliated with Stark Enterprises: they let the Empire State University use their launch facility to put a satellite into orbit to study the Earth ley lines.

While the experimental rocket sat on the launch pad, Spider-Man defeated an industrial spy, who was taking pictures of that secret ship on behalf of Stane International.[1]

The private launch facilities were secretly under surveillance by Doctor Octopus, thanks to the security schematics stolen by Electro in the Henly Building. While Peter Parker was attending the rocket launch, the Sinister Six attacked. As Spider-Man fought them, Ock loaded his poison dispersal unit into the rocket. Grabbing Spidey, Ock prepared to tear him apart, but Sandman stopped him. Ock used a ray gun to turn Sandman into glass, then forced the Cordco staff to launch the rocket. Hobgoblin took his pilfered poison capsule and dumped it in Spider-Man's face.[2]

The Sinister Six didn't understand why Ock's poison did't kill Spider-Man, so Ock revealed that it was actually a drug that caused extreme convulsions in cocaine users; the Sinister Six fled, vowing revenge, while Spider-Man restored Sandman to his normal form. Having learned that Octopus' chemical was depleting the ozone layer at a devastating rate, Spider-Man returned at night to Cordco Incorporated to have Thor launch a prototype satellite into orbit, in order to spray a burundite mist and deactivate the poison effect by Mjolnir's mighty wind.[3]

Like this? Let us know!
Retrieved from "https://marvel.fandom.com/wiki/Cordco_(Earth-616)?oldid=5545828"
Community content is available under CC-BY-SA unless otherwise noted.