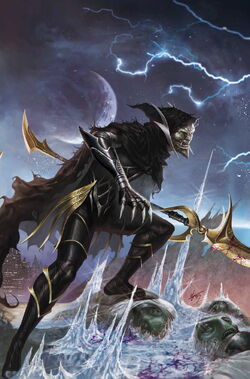 I am a servant of my master, Thanos-- a destroyer of worlds, a breaker of kings. I am one of the five, Corvus Glaive.

Corvus Glaive was a member of Thanos' Black Order alongside his wife Proxima Midnight and his brother Black Dwarf, and served as the right-hand of the Mad Titan. One of his tasks was to force the planets harassed by Thanos to give his master a tribute.[1] When Thanos targeted Earth as the next planet he would raze, Corvus Glaive arrived to the Jean Grey School for Higher Learning,[2] but left after realizing that Thanos' son was not there.[3]

When Thane, Thanos' son, was found in Orollan, the Black Order moved to that location in order for Thanos to murder his son.[4] Corvus Glaive was destroyed by Hyperion when the Avengers arrived to Orollan in order to fight Thanos. Thanos and Proxima Midnight were frozen in an amber construct which left them in a state of living death by Thane, and they remained imprisoned in the Necropolis along Corvus' glaive, which was all that remained of him.[5]

However, Corvus could not truly die as long as his blade was unbroken, and he began to slowly return to life inside his cell in the Necropolis.[6] As part of his secret experimentation with the amber cube, Maximus used a microscopic drill to let air reach Corvus Glaive's remains which fully regenerated him.[7]

Corvus Glaive along with Thanos and Proxima were freed by Namor, who had had a falling out with the Illuminati for destroying an alternate world during an Incursion, and joined his Cabal, in order to destroy another colliding Earth, as the Illuminati were resigned to their fate and were willing to let both universes die.[8] Corvus and the other members of the Cabal (excluding Namor) found great pleasure in the incursions, using them as opportunities to wreak havoc upon the other world before destroying it.[9]

Eight months after the formation of the Cabal, Namor had finally grown weary of their wholesale slaughter.[9] Namor, now willing to turn himself in for his crimes, devised a plan with the Illuminati to destroy the Cabal. A new Incursion was on the horizon, one in which the incursive world had been ravaged by the Sidera Maris. Namor would lead the Cabal to said world, activate the anti-matter injector without their knowledge, and leave them to die with said Earth, preventing them from escaping with the use of an A.I.M. platform capable of creating an impenetrable barrier between the two colliding Earths. As the Cabal engaged the Sidera Maris in combat, Namor set his plan in motion. However, he was betrayed by Black Panther and Black Bolt, who pushed him off the platform into the soon-to-be-destroyed Earth.[10]

Corvus and the Cabal confronted Namor, who lied about his intentions, claiming he had merely been investigating the platform and had been blindsided by the barrier. Before they could press him further, they discovered an unusual event was occurring. The Earth they were in was, in addition to its incursion with Earth-616, experiencing an Incursion with another universe at the same time. Unable to return to Earth-616, the Cabal made their way to the second Incursion point, and escaped from the doomed planet into the third universe, the Ultimate Universe.[11]

The Cabal allied themselves with the Maker, and began preparing with him for the eventual end of everything. Anticipating that the final incursion would take place between their world and the Maker's, they ensured Nick Fury would rally his world to fight theirs, buying them enough time to complete their life raft, which would enable them to survive the end of the Multiverse.[12]

As the final incursion raged, the Cabal were hard at work putting the finishing touches on their life raft, a device designed to allow them to survive the end of the Multiverse, based on the designs of Reed Richards. During the battle between Earth-1610 and Earth-616, the Maker used his Children of Tomorrow to buy additional time for the Cabal to complete their work. They were able to finish their craft before the incursion ended, allowing them to live past the end of everything.[13]

Eight years after the final incursion, the Cabal's life-raft was discovered and opened, awakening the Cabal. They awoke on Battleworld, a patchwork planet composed of fragments of various destroyed universes created by Doctor Doom.[14] The Cabal went on the move, trying escape the wasteland they had awoken in while plotting their next course of action. They were soon accosted by the Thor Corps, the police force of Battleworld.[15] Corvus and the Cabal were more than capable of holding their own against the Thors, prompting Sheriff Strange to summon the survivors of Earth-616 to fight them. When Doom himself intervened, Strange scattered all those present across Battleworld.[16]

Corvus and Proxima eventually found each other, but were stumbled upon by Baron Apocalypse and his Horsemen. Corvus and Proxima put up a fight, but were no match for the Baron and his Horsemen, leaving them grievously injured. They were turned over to Doctor Doom, who held them captured in stasis tubes and probed their minds for information about them and the other survivors.[17]

Following the rebirth of the Multiverse by the hands of Mister Fantastic,[18] Corvus Glaive took advantage of Thanos' absence to build his own Black Order, and take the Black Quadrant, a moon that belonged to his former master, for himself. Glaive spent the next months building his empire, taking over many planets as well as spreading his influence through the galaxy to make his army grow.

When Thanos returned to reclaim what he had stolen from him, Corvus Glaive tried to fight for it, but was easily defeated by the Mad Titan. After Thanos destroyed the blade of his glaive, Corvus was given the choice to either kill himself or be killed by Thanos in the last moments of his life. Fearing to suffer in Thanos' hands, Glaive used a piece of the broken blade of his glaive to end his own life.[19]

Corvus Glaive was returned to life by the Challenger as part of his preparations to reform the Black Order and have it fight the new Lethal Legion assembled by his opponent, the Grandmaster.[20] Before the contest started, both teams were teleported to the planet chosen as battleground, Earth, in order to survey it. A fight broke out between the contestants, but was quickly cut short by their masters since the game hadn't started yet.

Since Earth had been chosen as battleground so that its heroes could act as obstacles, the Black Order decided to launch a surprise attack on Avengers Mansion, destroying it with an explosion.[21] The plan failed since Voyager managed to teleport herself and her fellow Avengers to safety in the nick of time. Once the game started, each team was divided in half to fight for the possession of two Pyramoids placed on Earth by the gamemasters. Corvus Glaive was among the members of the Black Order that traveled to the Pyramoid site in Cusco, Peru.[22] A group of Avengers eventually stepped in, specifically when Corvus Glaive was close to killing the Lethal Legion's Ferene. After the Avenger Human Torch touched the Pyramoid,[23] and was teleported away in such a way it seemed like he had been disintegrated, the round ended. Corvus Glaive and the rest of the Black Order regrouped, with the exception of Black Dwarf, who had been taken off the board in a same way as the Human Torch after touching the other of the two Pyramoids.[24]

The following round, the entirety of the Black Order traveled to Antarctica to seize one of the new pair of Pyramoids activated by the Challenger and the Grandmaster. A group of Avengers attacked the villains. Struck by grief over the apparent death of the Human Torch as a consequence of the contest, Avengers co-leader Rogue brutally attacked Corvus Glaive and used her powers to absorb his powers and psyche. After taking Corvus' glaive from him, she impaled him with her fist, killing him.[25] Despite losing possession of his glaive, Corvus returned to life. Following the end of the contest and the Avengers' victory over the Challenger, the Black Order regrouped and escaped to the planet Angargal, where they were approached by the Grandmaster with an offer.[26]

Immortality: As long as his glaive's blade is intact, Corvus Glaive cannot die.[3]

Master Strategist and Tactician: Corvus was the right-hand man of Thanos and led his armies into battle. After studying Earth's history of warfare, Proxima declared that Corvus was the greatest general the Earth had ever seen.

Glaive: Corvus wields a glaive capable of splitting atoms (meaning it can cut through virtually anything, including the thick hide of the Hulk and even the skin of Hyperion).[5] If the blade remains unbroken, it allows his body to resurrect from any type of affliction, even from being atomized.[7]

Like this? Let us know!
Retrieved from "https://marvel.fandom.com/wiki/Corvus_Glaive_(Earth-616)?oldid=5668386"
Community content is available under CC-BY-SA unless otherwise noted.