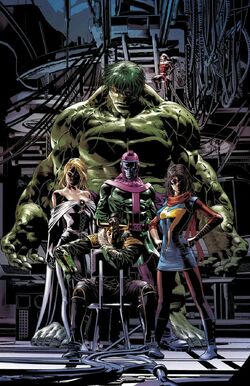 The Cosmic Avengers were formed by Loki to stop Gamora from destroying the universe. He specifically picked each member who he deemed uniquely suited to wield a Infinity Stone. After first recruiting Emma Frost, Loki then recruited Ms. Marvel and Kang the Conqueror and later Ant-Man and the Hulk. Loki tried to recruit Adam Warlock, but he insisted that they stay in the Soul Stone and fight Devondra who was responsible for corrupting Soul World. So, Emma used telepathy to call for various heroes to help Adam.[2]

After finding the answer he sought, Loki gave the Infinity Stones back to the Cosmic Avengers. The Avengers then reentered Soul World and rejoined with Adam Warlock. After Hulk used the Space Stone to defeat Devondra, the Cosmic Avengers used the Infinity Stones to restore the universe as well as ensure Warp World remained in existence. They then escaped Soul World with Gamora, Star-Lord, Rocket Raccoon, Groot, and alternate reality versions of Moondragon and Captain Marvel while Drax the Destroyer stayed behind to keep the portal opened. After landing in Egypt, Adam Warlock decided to send Gamora someplace where she could redeem herself and then gave the Infinity Stones sentience so they could determine their own fates so no one else could fight over their power.[4]

Retrieved from "https://marvel.fandom.com/wiki/Cosmic_Avengers_(Earth-616)?oldid=5855189"
Community content is available under CC-BY-SA unless otherwise noted.