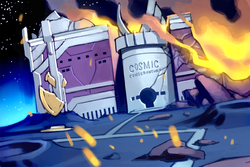 We have the Academy. A.I.M. and Hydra have their schools. It only makes sense there'd be an intergalactic school for powered people.

The Cosmic Conservatory was an Academy for Cosmic heroes. Not much is known about it, but there were rumors that it had been destroyed and that Carol Danvers was one of it's former students.

Guardians of the Galaxy vs Thanos

After a confrontation with Thanos who had taken over the school from the Collector, some of students escaped the school, those students crash landed on Earth at the Avengers Academy and eventually joined the school.

Thanos sent Ronan and a group of Chitauri students after the escaped students who took the Power Gem shards from him when they escaped during their confrontation, the Guardians of the Galaxy along with the other Avengers Academy students eventually defeated Ronan and the Chitauri, after that they launched a counter attack against Thanos by destroying the school using the Milano Space Ship built by Rocket and Iron Man, Thanos apparently escaped, but the school was destroyed.

According to Gamora, the school was more of a museum or a prison than a school, since it's Headmaster the Collector collected young powerful beings around the cosmos himself and held them at the Conservatory as part of his collection, instead of the students willingly joining the Conservatory. Gamora also told Black Widow that at least five more students from the Conservatory are currently hiding on Earth, but they are concealing their presence from potential threats.[1].

Retrieved from "https://marvel.fandom.com/wiki/Cosmic_Conservatory_(Earth-TRN562)?oldid=5611176"
Community content is available under CC-BY-SA unless otherwise noted.