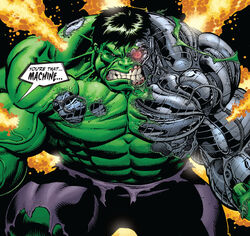 This robot construct of the Hulk was created as a misguided experiment by two students at the Maryland Institute of Technology and inadvertently brought to "life" by exposure to cosmic energy from the Eternals' Uni-Mind. The construct ran amok in a nearby city, killing several people and causing massive property damage.[1] The Eternals Sersi, Makkari, and Ikaris attempted to subdue it, but only the Eternals' ruler Zuras was able to vent the cosmic energy giving the robot life. The pseudo-Hulk fled to the city's sewers, where it exploded, inadvertently freeing the Deviant Mutate Dromedan from his crypt beneath the city.[3][4]

It was used as a member of the Assembly of Evil.[5]

More recently, the Hulk robot was stolen from Olympia by the Intelligencia[6] and used in an attack on Dr. Doom. This was done in an attempt to frame the real Hulk of attacking Latveria. However, Doom easily beat the robot and ripped off it's skin revealing it to be a robot.[7] It was later sent to destroy a S.H.I.E.L.D. Helicarrier where it encountered Red Hulk. At first, it defeated and nearly killed Red Hulk, but Ross mustered up all his anger and guilt and caught it when it was off guard. He then tore it in half. It was later taken by S.H.I.E.L.D. and put in storage.[8]

Seemingly those of the Hulk, enough to fight Red Hulk.

Like this? Let us know!
Retrieved from "https://marvel.fandom.com/wiki/Cosmic_Hulk_(Earth-616)?oldid=5750412"
Community content is available under CC-BY-SA unless otherwise noted.