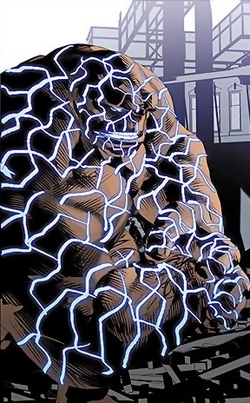 Midas was a psychotic obsessed with gaining cosmic power like the Fantastic Four, he used the Midas Foundation to further his goals and eventually his obsession led him to shoot down Noh-Varr's ship as it ran off of cosmic power and then hunt it and Noh-Varr down, previously to this he had hunted, captured, vivisection and killed many alien beings.[1] Midas was incredibly abusive of both his wife and daughter. He was seemingly killed by hordes of Mindless Ones while in the Dark Dimension but did in fact survive.[2][3]

When the Orb contacted Midas into helping him steal from the Watcher's citadel, the Exterminatrix accompanied them, and also got hold of one of the eyes of the Watcher after he was knocked out by Orb.[4] The eye's influence caused numerous Mindless Ones in possession of the Orb to radically change, develop thoughts and evolve. After one of the Mindless Ones escaped the Orb's lair and committed suicide following a battle against the Avengers, the heroes began investigating the connection between the Mindless Ones' behavior and the death of Uatu, who had died shortly after the assault on his base.[5]

When The Orb, Exterminatrix and Midas were finally pinned down, she fought numerous heroes until her defeat. The Orb then revealed himself and activated the eye, unleashing the secrets of the Watcher.[6] In the confusion created by the blast, the Exterminatrix and Midas escaped.[7] They then activated a spaceship hidden in a secret location to get back to the Moon and get more from the Watcher's base.[8]

In the Moon, Nick Fury tried to stop Doctor Midas, but he was attacked by the Mindless Ones. After getting rid of the monsters, he found Midas absorbing the powers from Uatu's corpse. By forcing Midas to absorb the power of one of Uatu's eyes all at once, Midas overloaded and exploded.[9]

Initial exposure to cosmic rays gave him a plethora of irradiated gifts:

Once after bathing in concentrated cosmic rays he acquired:

He is very clever and knows take advantage of any situation.

He possessed a suit similar to the Iron Man Armor Model 1.

Like this? Let us know!
Retrieved from "https://marvel.fandom.com/wiki/Cosmic_Man_(Midas)_(Earth-616)?oldid=5837670"
Community content is available under CC-BY-SA unless otherwise noted.