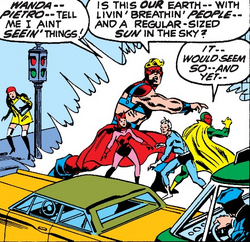 Cosmopolis looks like the rough equivalent of New York City in Earth-616.[1]

A small group of Avengers appeared in the middle of Cosmopolis, where they were soon confronted by the Squadron Supreme. After a brief battle, the Avengers soon realized they aren't on their own world when the Squadron got a message from their other teammates Dr. Spectrum, Hyperion and Whizzer, explaining that they were launching a satellite called "Brain-Child One" into space. Realizing that the satellite was possibly what would doom this world, the Avengers took one of the Squadron's ships and Nighthawk with them, to warn the other Squadron members of the danger that the satellite they're about to launch may pose to their world.[2]

Like this? Let us know!
Retrieved from "https://marvel.fandom.com/wiki/Cosmopolis?oldid=5719993"
Community content is available under CC-BY-SA unless otherwise noted.