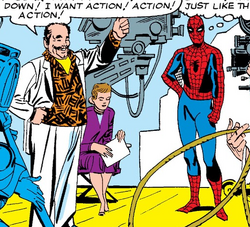 The Green Goblin proposed Cosmos Productions to film a movie starring him, the Enforcers and Spider-Man. Since it was actually just a ruse to lure Spider-Man into a trap, after reaching a deserted area in New Mexico where the movie was to be filmed, the Green Goblin flew away, Spider-Man vanished and the Army turned the Enforcers over to the police, although B.J. Cosmos attempted to sign the Hulk for another movie.[1]

Like this? Let us know!
Retrieved from "https://marvel.fandom.com/wiki/Cosmos_Productions_(Earth-616)?oldid=5545844"
Community content is available under CC-BY-SA unless otherwise noted.