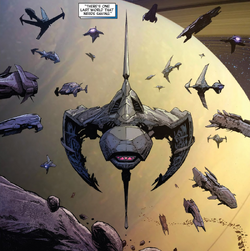 The Council fleet was a technologically advanced armada, which included both conventional ships (technological / mechanical) and organic living vessels (the Acanti). Despite it being a force made up of the combined fleets of the major galactic powers of known space, it was still greatly outnumbered and outgunned by the Builders' fleet. Deployed on the fleet were not only the Avengers but also the Shi'ar Imperial Guard, the Kree Accuser Corps, and Galadorian Spaceknights.[5][6]

The Council Fleet was assembled from the combined fleets of the Shi'ar Empire, the Kree Empire, the Spartoi Empire, the Brood, the Annihilation Wave, and the united Skrull warlords. The pan-galactic fleet was commanded by the Shi'ar Majestor Gladiator. It was decided to set a trap for the Builder Armada at the site of a previous battle between the Kree and Shi'ar. Which was called the Corridor, between a black hole and the remnants of two shattered planets. The asteroids were mined and they waited for the Builders' fleet to come out of warp. At first it looked as if the trap succeeded, only to discover that it was the Council fleet which fell into a trap as they lost a third of the fleet in a minute. They had no choice but to retreat.[4]

The Builders relentlessly pursued the remnants of the shattered Council fleet to the agricultural world of Whaan Prime. Refusing to run anymore Gladiator rallied the fleet and counter-attacked, successfully pushing back the Builders. In retaliation and as a demonstration of power, one of the Gardeners was sent down to the planet due destroy it with a plague.[3] The Council armada relocated to the Ringworld Behemoth, destination for over a hundred million refugees. Where they were unable to stop it from being nearly destroyed by sentient drone ships launched by the Builders' fleet.[7][8]

It was the Avengers who came up with the plan for the battle that turned the tide of war in space. The Council armada launched an attack on the main Builders' fleet over the Kree throneworld of Hala which was recently conquered by the Builders. Two of the Builders' planet killers were captured by teams of super powered individuals. Who then turned the planet killers on the Builders' fleet, destroying eight of the planet killers before the Builders were able to withdraw.[8] In gratitude to the Avengers for helping liberate their worlds from the Builders, they placed the Council Fleet temporarily under Captain America's command for the liberation of Earth from Thanos, who then used the fleet to help them liberate Earth from Thanos and his Black Order.[6]

Retrieved from "https://marvel.fandom.com/wiki/Council_Armada_(Earth-616)?oldid=5545849"
Community content is available under CC-BY-SA unless otherwise noted.