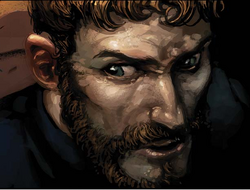 Reverend Craig first appeared as a leader in a mob to kill his biological daughter, Rahne Sinclair (who believed him to be her foster father). Rev. Craig raised Rahne with a strict religious and moral code from a young age to compensate for his own lapse in character which led to her conception, as she was conceived from an illicit relationship, and was convinced she was possessed by Satan when her mutant powers of lycanthropy emerged. Rahne was saved by Dr. Moira MacTaggert and Rev. Craig left her to be raised by the Doctor. He later appeared again with the Purifiers alongside Reverend Stryker. He then appeared a few times fighting the New Mutants.

Sinclair later appeared with a new group of the Purifiers. He was mauled and killed by his own daughter Wolfsbane, whom he had helped brainwash to attack Angel to steal his techno-organic wings.[1]

Like this? Let us know!
Retrieved from "https://marvel.fandom.com/wiki/Craig_Sinclair_(Earth-616)?oldid=6513529"
Community content is available under CC-BY-SA unless otherwise noted.